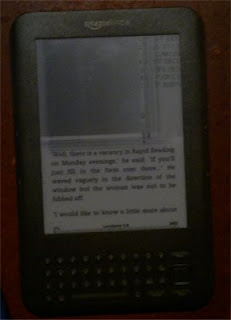 I set of to work this morning as usual. I was half way to Canterbury when I realised that I'd left my mobile phone behind. I rarely use the thing during the average work day, and maybe get an occasional text message coming in. But I've got used to the feel of the thing in my breast pocket, and I felt quite lost without it today.

Meanwhile in orbit Chinese astronauts have docked their spaceship with the makings of what will eventually be their own space station. One can't help but wonder why they didn't save a few quid and throw in their lot with the rest of the world on the ISS. Did they really need to set up a rival space station? Well - of course they did. National prestige is at stake. The Americans and Russians played that game forty years ago until they realised how much it cost. I wonder how long it will be before the Chinese realise the same. And, bearing in mind human nature, which country will then take over from the Chinese to go it alone at taking over the cosmos.

Mind you, it's not all beer and skittles on the ISS. It would seem that the international contingents there are planning to get competitive and join in with the forthcoming Olympics. That should be interesting.

Also on a futuristic theme, for many years the pundits have been banging the drum about catastrophic global overpopulation. With a finite load of resources and an ever increasing human population, something's got to give at some point. And now it would seem that the Malthusian doom-sayers have found something else to worry about. Your average porker needs more food to keep giong than do us skinny people (he gloated!) And with calculations showing that twelve Americans weighing the same as seventeen Asians, it would seem that western obesity is effectively reducing the available food resources as badly as adding an extra fifty six million people would.
Perhaps diets might be in order. Works for me (!)
Mind you, when you consider the latest gadget to hit the streets - automatic cake dispensers - is it surprising we have a world of chubbies?

And then I dropped my Kindle. For all that I love the idea of ebooks, an ebook reader with a knacked screen is no good to anyone. If any of my loyal readers could recommend a cheap ebook reader, I'm all ears...