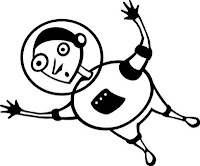 After a bit of general whinging on my part, it came to light that there was a Sony PRS-600 ebook reader sitting about doing nothing. I've got the thing on approval, and am giving it a test run to see how I get on with it. If I like it I have the option to snap it up at a reduced rate.
Do I like it? Well, yes. It's OK. In many ways it's very little different to the Kindle. As an e-reader, it'll do. But.... (and there's unfortunately a big "but")
I've managed to get all of the books that were on the Kindle out, and I've put them through the converter to make them back into .epub format so the Sony device can read them. However anything that I downloaded directly from the Amazon store is unconvertible. Which is a pain. I've spent out quite a bit of dosh on ebooks that are now useless to me unless I get a replacement Kindle. Which won't be cheap.
Also the availability of free ebooks on the Internet isn't what it once was. The site from which I blagged every James Bond book known to science now has less than six of them available; and the mobile phone site which once was good for forty ebooks a day has been replaced by a legal notice saying that they got sued for breach of copyright for giving away all the books for free.
I have mixed feelings about this. As a writer I'm glad that my work is now being protected. As a reader on a budget I can't help but feel a tad miffed.
I watched a video: I had a phone call from a chap who'd been sent my C.V. by one of the agencies, and he thought i might be just the person he wanted. After he'd been talking for half an hour without actually saying anything he sent me a link to a video to see if I would be interested in his company. Basically he wanted me to shell out several hundred pounds to then sell Aloe Vera based products on his behalf. I'm already embroiled in one such scheme that (it has to be said) hasn't really lived up to the hype. I'm not going to start another.
And spare a thought for comedian Jimmy Carr today. He's all over the news, and ha admitted to having made "a terrible error of judgement". It would seem that rather than having his tax deducted when he is paid (like most of us mere mortals), he gets to pay his tax in a lump sum. And, like everyone, he doesn't want to pay more than he has to. So he took advice, and participated in the "K2 tax scheme". I have no idea of the details; suffice to say that it is all legally fine. But the Government didn't like it (presumably because it reduces the amount of money they have available to waste), the Prime Minister has declared it "morally wrong" (!) and poor Jimmy Carr is now running scared. If the Government don't like current tax laws, then they are ideally positioned to do something about them. If the Government want to change the law, then that is their prerogative. But to pick on an individual and make him the scapegoat for the failings of their own laws is surely morally wrong itself?
Perhaps Jimmy might squander some of his riches on a ticket to the moon? Those with (a lot more) money than sense have the option to buy tickets on a four-month trip to the moon and (hopefully) back again. The trip is being organised by some bunch who've got their mitts on some left-over Russian kit and are planning to set off in the next three years, but won't actually feature any trained astronauts because (apparently) it's not the sort of thing which might appeal to them. I would have thought that going to the moon would have been right up their street, but what do I know?
Posted by Manky Badger at 9:10 pm