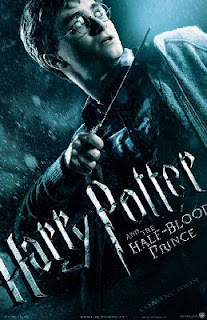 I wasn’t sure what the plan for today was, but I was hoping for something. A walk, a bike ride. But I woke up to drizzle, and the day never really cheered up much. I got the lawn mowed, which was a result, and I thought about cleaning out the fish pond filter. But I thought better of that idea. I might do it one evening in the week – I really couldn’t face smelling of carp poo today.

To the cinema with Chris. I’ve been wanting to see the new Harry Potter film ever since I read the book four years ago. I can remember queuing up at midnight to buy the book when it first came out, and spending much of that weekend sitting with a gaggle of friends in Kearsney Abbey. I enjoyed the book. Like any sixth book in a series, it relied heavily on what had gone before. And if I hadn’t read the previous five books prior to reading it, I would have been somewhat confused. But that’s how a series works. Take the Star Wars films for example. One follows nicely into the next. To use a technical tern, it’s got “continuity”.

I’m afraid to say that today’s film was, like all Harry Potter films, rubbish. It only works as an illustration of some of the scenes from the book. As a self-contained work of cinematic art, it fails at the first hurdle. If you’ve read the book then you will recognise the various scenes of the film. If you’ve read the book and know the characters, some of the scenes are variously amusing, well done, emotional and scary. And they are done so well that you don’t realise that the scenes are utterly disjointed and that the film actually lacks any continuity whatsoever. Why on Earth were the characters of Neville, Fred, George, Luna, Tonks and Lupin in this film at all? They lent nothing to the plot (such as it was) and having been given centre stage for a scene or two, they never appeared again. What was that with Dumbledore’s hand? Or the pensieve? Or the phoenix?

Compare this to a film I watched earlier in the year. “Twilight” worked as a film of a book because some things from the book were left out, and the story was consistent without those dropped elements. The Harry Potter film wasn’t. It didn’t have a plot that could be followed, and only made any sense if you’d read the book.

On another note, I was amazed how busy the cinema was at 1pm on a Sunday – heaving. And I felt rather sorry for the parents of the hoards of six year olds who’d taken their kiddies to see what wasn’t (by any stretch of the imagination) a child’s film. There will be nightmares tonight….