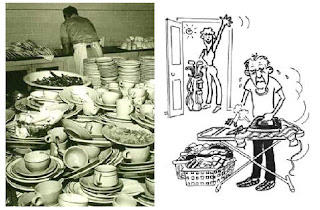 After some two hours sleep last night I was woken around 2am by the sounds of “My Boy TM ” quietly bringing loads of crockery out of his bedroom. He had no plan to wash it up, just to dump it in the kitchen. I then lay awake until 5am when I gave up, got up and ironed. After all, I’d spent all day yesterday generating the stuff – might as well get it done.

I came home from work to find that “Daddies Little Angel TM ” has spent the day generating more washing up. Neither brat will actually wash any of it. It transpires that it would cause them physical pain to wash anything they personally haven’t dirtied, so to be on the safe side, they leave the lot. It’s just as well that I’m there to skivvy after them.

I hoiked a dead fish out of the pond. A mirror carp. Rather odd, as we never put any mirror carp in there. I wonder how that got in?

Yesterday’s missive from the chokey brought a visiting order. But what with people having booked leave in August already, I’m not able to arrange another prison visit until September. September !! – the year’s flying away.

And, a closing thought – at the beginning of the month I mentioned that I wanted to go back to . Today the boss has mentioned that he’s off to for three weeks. Going to Victoria, , then down into . I want to go, too!!