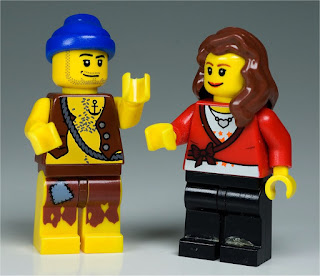 I got fed up with laying in bed wide awake watching the clock so I got up, sorted myself a bowl of granola, and as I scoffed it I watched the last episode of "Away" in which our heroes made it to Mars, but as the show had gone on it posed all sorts of questions that remained unanswered. I suppose now that the series has finished, who cares? I wonder what I can watch next?

As I watched I found myself struggling to hear the telly over the sound of Sid's snoring. Foe a small dog he snores quite impressively.

I had a quick look at the Internet and was amazed to see that some ardent feminist was kicking off on a Lego-related Facebook page. She had the right arse about rampant sexist myths and attitudes being propagated by Lego minifigures. Apparently human women are capable of mowing lawns, and human men are capable of sewing even if Lego minifigures of those genders aren’t. Not many people cared, but those that did had blown the matter out of all proportion.

I set off up the motorway on a very cold morning.  As I drove to work the pundits on the radio were talking about the death of Metropolitan Police Sergeant Matiu Ratana who had been shot dead at Croydon Custody Centre by someone who (so it is now claimed) had both hands handcuffed behind his back at the time of the shooting.

I can't help but wonder how the criminals have got a gun in a custody centre, but what do I know?

With a few minutes spare I popped in to the petrol station. I got petrol, and as I walked out of the kiosk (after paying) I saw some rather nervous-looking chap mincing toward the kiosk. Wearing a rather thick face mask and rubber gloves he made a point of giving me a wide berth. I sort-of went the wrong way to move round him. He didn't actually run but he certainly backed off with some alacrity. I think that had I chased him he would have run down the road screaming.

Some people do take this social distancing to extremes.

I got to work and did my bit. And with my bit done I popped to Aylesford Aquatics where I got some filter pads for the pond filter and a hose for my planned water feature. I then drove straight past Stonecraft Paving Centre completely forgetting I wanted some large stones from there.

I collected "er indoors TM" and the hounds and we drove down to Orlestone Woods where we had another good walk. Two miles along which the dogs could run to their hearts’ content and not have to worry about upsetting any of the normal people.

Once home I spent a little while bleeding some of the radiators. Quite often there are contents on Facebook in which people compete to be the last to turn their heating on. I’m having none of that – if I’m cold, on it goes.

I’ve programmed “Hannah” for tomorrow, and  "er indoors TM" is boiling up dinner… it smells rather good… I hope it is. It might chirp up what was a rather dull day.