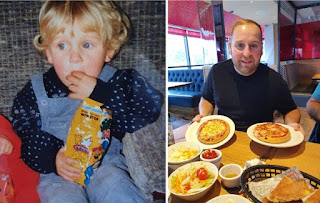 I slept like a log. A night shift, a bottle of “Laughing Llama” (very nice!) and half a bottle of amaretto yesterday did help. Over brekkie I looked at Facebook; for once there wasn’t a lot going on. I sent out a birthday message to "My Boy TM". I also saw that someone had solved the geo-puzzle I set. Having been live for two days, only one person has got the thumbs-up from the geo-checker, and no one had been out to find it yet.

We had planned to take the dogs out this morning, but it was raining too hard. For all that the dogs wanted to go out the front door they were all refusing to go out the back. So we settled them and went on a little mission.

Firstly up the motorway to Sheerness and Whelans. We got another humungous pot for one of the shrubs. We another humungous pot, a smaller pot and a “rabbit tableau” with which I shall make a water feature. And we got an assortment of garden ornaments just because we could.

From there we went to Pizza Hut where we met "My Boy TM" and Cheryl. We are far too much of a a really good dinner and it was good to catch up. Especially as today is "My Boy TM"’s birthday. But Pizza Hut itself…

Have you been there recently?

As we arrived we were told that they are very COVID-19 aware and so they are operating this scheme where you use your phone to order your food and pay for it, and they then deliver it to your table. Like most of today’s technology it is a brilliant idea in theory, but in practice fails to live up to what was promised. But after twenty minutes we finally managed to get the starter brought out.

The chap serving us was quite a laugh – every time he spoke he took his face covering off so we could hear him better. And the nice lady bringing the pizza to the table apologised that she was only allowed to slice the thin crust pizzas. We had to slice up the ones with the thick crusts ourselves so as “to reduce cross-contamination”.

As I said at the time there is no point in looking for any sense or reason in any of the COVID-19 (so-called) precautions. You just need to take the line of least resistance and go with the flow.

We came home and emptied the car of all that we’d bought from Whelan’s. It took some unloading. And seeing how the rain had stopped we took the dogs down to Orlestone Woods for a rather good walk. The dogs ran free and had a whale of a time. No squirrels or rabbits were bothered at all; the dogs were quite content chasing shadows.

With walk walked we had a cuppa then went up to Lidl for a spot of shopping. It was dull..

"er indoors TM" is boiling up some dinner… I hope.

Oh – and today is Treacle and Pogo’s birthday too…