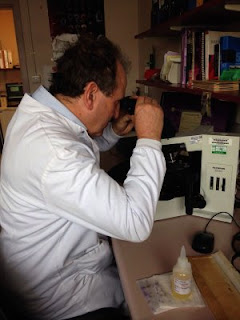 In a change to the usual routine I took "Furry Face TM" for his walk before brekkie. We got up and went straight out. It was a tad chilly. We went round the park; we came home again. For once absolutely nothing out of the ordinary happened. It was a bit dull really.

We came home. I had my morning ablutions then we had brekkie. As I scoffed toast I watched the most recent episode of "Extant". I hear the show is not getting a third season; you know the thing is going downhill when the main character gets her kit off for a smut scene.
As I watched the phone rang. Someone claiming to be called David had phoned from Windows technical support becasue "my windows computer am got the virus". I wasted ten minutes of his time before telling him (quite literally) to f... off. This scam was quite imaginative and amusing when it first came out but they still keep trying it on after all these years.

I then had a letter from councillor Jenny Webb inviting me to a coffee morning next week. I did a little Googling and found that she is the local councillor. One lives and learns. I may well go drink her coffee and give her a hard time over local issues. Or I may not.

I emptied the dishwasher and promptly smashed a glass. I cleared up the carnage and set off to work. Once I remembered where I'd parked the car last night. As I drove to work "Women's Hour" was on the radio. I'm often less than complimentary about that program. I'm afraid it wound me up somewhat today. It had a feature on an international competition for violinists aged under twenty-two. They had one of the contestants on the show. Someone called Matild (*not* Matilda) from London came on and played the violin for five minutes. I can't deny she was far better than I could ever be (having played the instrument myself many years ago) but the sound of her music was shrill to the point of being painful.
There was then a frankly embarrassing interview with Matild in which the radio show's presenters effectively told her not to be ashamed of being a geek. I though they were rather rude to the poor girl.

I negotiated the traffic jams and got to work just as "Daddies Little Angel TM" phoned to lambast me for having the baby seat in my car. She needed it. Woops.

Work today was something not unlike the end of an era. Alistair retired. I've known Alistair for twenty years or so. Originally as a colleague but...
There are all sorts of maxims and platitudes about finding out who your friends are; I shall just say that I hope that none of my loyal readers ever have to find out who their real friends truly are.
I have done. It was not something I'd care to repeat. Those who know me well know that my life had something of a hiccup five years ago. It was no secret; it was rather obvious. The stress of the time made me lose a third of my body weight. At that time I found that many people who I thought were true friends were not. And several people who until that point had been rather peripheral in my life turned out to be wonderful people. Alistair was one such wonder. I won't go into detail about how he helped me, but I'll say that he went far out of his way to help me in ways that many other people I'd known longer and better (and thought would help me) did not.
I shall miss him.