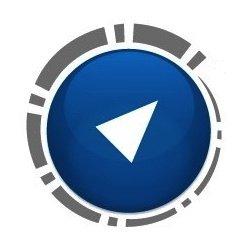 I slept like a log last night. So did my dog; when I got up this morning he was in his basket. He usually sneaks upstairs in the night. He must have been tired if he didn't sneak up last night.
Over brekkie I checked my emails. I had two emails of thanks. Yesterday when walking we found that two geocaches had clearly gone missing from along the route we had walked. They do that from time to time. When this happens you have two choices; you can either log "Needs Maintenance" together with a saga of how much precious time was wasted on a wild goose chase which tells whoever hid it to go sort the problem. Or you can do the decent thing for all concened and replace it yourself (and tell whoever hid it you've done so).
Opinion is (for some odd reason) divided as to the correct course of action. Yesterday we replaced two missing caches; today I got two messages thanking me.

I popped the lead onto "Furry Face TM" and we went for a little walk. On Saturday I put the finishing touches to my latest Wheri-project and this morning we had field trials. There were two minor tweaks I needed to make, but other than that all was good. I was pleased about that.
As we field-tested I needed to go from place to place on the map, and at each place stop and fiddle about. "Furry Face TM" wanted to stop and fiddle when I was walking, and he was pulling to walk on when I was stopped to fiddle about. If only I could explain to him...
As we walked we saw a rather odd-looking woman. Pushing a push-chair in her pyjamas she was pulling a facial expression which I can only describe as that of a duck with indigestion. I wonder what that was all about?

Off to work. A new geocache had gone live this morning not far off of my drive to work, and the call of the First to Find was too much to resist. I drove as close as I could and then found that the one day I'd not got my wellies in the car was the one day I actually needed them.
But I didn't get *that* muddy, and I got to do the secret FTF dance too.

I stopped off at Morrisons and got some bits and bobs, and nearly committed murder myself. Why is it that with an entire supermarket in which to dawdle about, everyone has to stop dead in the doorways to do their staring into space?

Once at work I pootled about leaving dried mud in my wake. Several people asked where the dried mud was coming from; I kept quiet until home time.