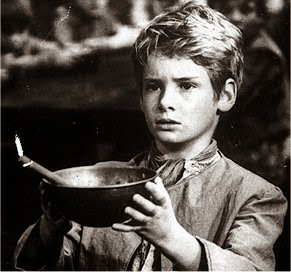 Over a rather early spot of brekkie (shared with my dog) I watched the latest instalment of the Tomorrow People. Today's episode featured a guest appearance of Nicholas Young who was the star of the original series. I do like this program - I have yet to sleep through much of it. But I do wonder how far it can go before straying into ground already covered (and done to death) by shows such as "Heroes" and "The 4400".

And so to work through the driving rain. After a lovely day yesterday, today was rather mucky. As always I listened to the radio. I had a wry smile about the article on child poverty in the UK. Up until now a child was considered to be in poverty given that the family income was less than a certain amount. Apparently this simplistic method of deciding whether or not a given child is being brought up in poverty is to change. A new calculation is to be devised which accounts for all sorts of demands on the family budget including alcohol and drug dependency. The implication being that druggies are to be given more leeway than decent people when it comes to assigning social and financial status.

And I grinned like a Cheshire Cat at the news from the financial giant Standard Life. Ostensibly a Scottish company, it's made no secret that it wants no part of an independent Scotland. I've said so many times that devolution is a bad thing. It seems I'm not alone in thinking this.

And so to work where I had a rather busy day. And some news. Whilst I'm pleasaed to have had a professional advancement, in the new world order I'm not going to be able to take any holiday over the Teston Kite Festival.
So I probably won't be going this year; which is a shame. I might pop up for the day, or I might organise a booze up somewhere else.
I've a few months to sort something out...