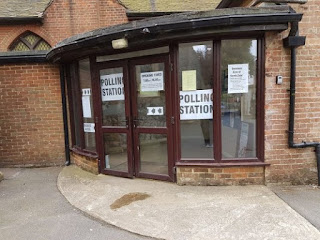 Over brekkie I had a look at Facebook. There is a group for old boys of the school in Hastings that I used to attend. I saw a chap who was in the year below me at that school had died yesterday. There was a lot of crocodile tears from people who’d not clapped eyes on the chap for over thirty years.
Mind you I found myself looking through that group; there were a lot of names that I remember from the late 1970s and I found myself calling up several profiles of people to whom I’ve not given a thought in years. So many of them have small children now. I couldn’t imagine having small children at this stage in my life.

Being election day there was a lot of political stuff on Facebook. In the past I’ve been rather vocal and I’ve been told that I’ve been intimidating on things political on social media, so this time I’ve kept (mostly) quiet. Several people were complaining about there being too much of the stuff; I’d say there was too much ill-informed rubbish. With so many issues unaddressed by the masses I still feel the election will be won or lost by the public’s perception of Jeremy Corbyn; I have not seen or heard a single reason for voting Conservative that isn’t based on the premise that they aren’t as bad as Mr Corbyn.
Interestingly "Daddy’s Little Angel TM" has announced there is a lot of merit in the Green Party. I never had her down as a tree-hugger. Perhaps I need to see what they are up to?

I put on some old clothes and set about painting more fence, despite the “help” of my dogs. At one point I had to pull the baby’s head out of the paint pot. I don’t think they got any paint on them, but I wouldn’t swear to it.
Whilst I had the old clothes on I got the lawn mowed, and cut back more of the overgrowth from next door’s jungle before taking my dogs round the road for a short walk. The puppy pulls like a train; you really wouldn’t believe she had a total hysterectomy on Monday. Fudge straggled; in part because of his bad back but mostly because he felt the need to sniff absolutely every single thing we passed.

Once home I had a cuppa and spent a few minutes talking about Wherigos (on-line) to a nice lady. Like most people she’d made the mistake of thinking that the official app and associated stuff made by the parent company of geocaching was fit for purpose. Hopefully I managed to give her a few pointers.
I also had a message from "My Boy TM". Having spent thirty quid buying a new fishing brolly, his mate is now selling the same thing for a tenner…

I settled the dogs, and set off on a little pre-work adventure. Firstly to the polling station where I marched in. It was only when all the pensioners glared at me that I realised I’d been whistling “The Red Flag”.
I then drove over to B and M bargains for cut-price fishing bait before setting off to Maidstone. Petrol followed by chicken McNuggets and fries, and then off to work for a rather busy shift…

I wonder who will win the election…?