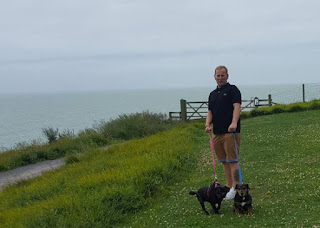 I was woken by a wet nose being thrust up my bum shortly after 6am. The puppy has a unique way of attracting attention.
I had a bit of brekkie whilst the washing machine did its thing. As I scoffed I had a look into cyberspace. Little had changed overnight, so I put on some old clothes and got on with painting fence until "er indoors TM" emerged from her pit.

Usually on a Sunday we'd go for a serious walk. But our usual walking companions were off at a course about kicking people in the throat. Or doing karate. In my world the two are synonymous. Also what with having two convalescent dogs a major walk wouldn't be a good idea. So we thought we'd have a little stroll round Samphire Hoe; after all it is rather pretty there. (Samphire Hoe is a rather pretty place in the summer; rather desolate in the winter. It is an artificial park built just off the White Cliffs near Dover made from the spoil created when they dug the Channel Tunnel)
We picked up "My Boy TM" and Lacey (Cheryl was working) and set off. We made good time despite the road works, and soon met up with Jimbo in the car park.
And then five of us and four small dogs walked to the far end of the Hoe and along the beach for a bit. I thought I'd have to carry Fudge but he did really well even if he did struggle in the shingle. And (would you beleive it) we found three geocaches there as well.

Just as we were leaving the mist was rolling in. Really pretty. It would have been good to have stayed longer but Lacey had a better offer for the afternoon so we had an ice cream, said goodbye to Jimbo, and came home.
Five minutes from home "My Boy TM" suggested an afternoon's fishing. Bearing in mind my plans for the afternoon were cleaning the fish pond filter and more fence painting I jumped at the opportunity. "er indoors TM" didn't complain; she's really good like that.
We had a good afternoon at Shirkoak; no seriously big fish, but probably twenty or thirty (each) weighing about a pound, and a couple (each) closer to four pounds.

We got there shortly after 2pm; we left at 6pm. An excellent way to spend the afternoon. I came home to find that having damaged the washing machine's dial yesterday, "er indoors TM" had totally destroyed the thing this afternoon. So I painted more fence whilst I pondered the matter, and then phoned the fix-it people. They gave me a reference to give to the people who will (hopefully) actually do the fixing. I’ll sort that out tomorrow.

"er indoors TM" boiled up a good bit of diner, and we scoffed it whilst watching yesterday’s episode of “Doctor Who” on the SkyPlus box. It was surprisingly good…