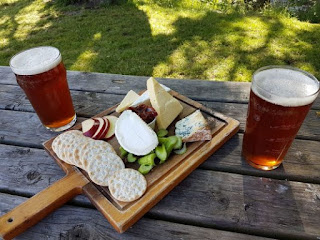 Another relatively good night’s sleep. I wonder if this is connected with my sleeping *on* the bad as opposed to *in* it?
I woke a couple of hours later than usual, and over brekkie watched an episode of “Dad’s Army” in which Captain Mainwaring was looking at the womenfolk’s bloomers. Nice work if you can get it…

Mind you despite something of a lie-in, I was out in the garden and painting fence shortly after 7am. I got one panel done whilst "er indoors TM" farted around in the shower, then I used the bath to clean out the fish pond’s filter. The pond water is rather green; I need to replace the ultra-violet bulb. And with the filter cleaned (and me smelling of fish poo) I got another two fence panels painted. I would have done more had I not had to continually pull dogs heads out of the paint pot, and pull dogs off of wet paint. I did have plans to mow the lawn and cut back the crap hanging over the fence on not-so-nice-next-door’s side but time was pushing on. So I stopped and looked at the garden and reviewed the situation.
I have plans for the garden… I want to take up all the shingle behind the pond and lift the weed-resistant membranes. With that done I can re-landscape with a view to replacing a fence panel (much of which is currently buried) and building up a mound behind the pond on which I can have a stream from the filter feeding the pond.
I want to lower the fence at the end of the garden and put trellises up.
I want to look at the possibility of building a gazebo to go over the pond to reduce the green algae.
I want to get some planters to go at the house end of the garden to make a feature behind a tired water feature.
However the most difficult part is going to be getting not-so-nice-next-door to repair their broken fence.

I had a quick shower, and on the stroke of mid-day the doorbell rang. The washing machine fix-it people said the chap would be along between mid-day and 2pm. He was prompt. The dogs set about “helping” him, and I left him to work his magic. He was done in half an hour, and left us with some stuff to de-gunk the works.

Jimbo arrived, and we took the train to Wye for a beer or two. The train got us there us there a few minutes and we walked up to the Barber’s Arms. Billed as one of the best micro-pubs in Kent the place is rarely open, and again we found it closed. So we carried on to the Flying Horse where we sat in the garden and had a pint of Whitstable Bay whilst some ill-behaved brats screamed in the background for no reason than that they could.
From here we walked down to the Kings Head and sat in a rather uninspiring concrete courtyard where the same round cost two pounds more. Mind you there was a rather raucous piss-up going on which was being led by a vicar. I suppose they kept their prices up to keep the riff-raff out.
We took a little stroll downhill to the Tickled Trout and sat by the river. The beer garden here was full of children, but they were all playing nicely and having fun. Not one felt the need to scream continually, which was a bonus. One child was a little concerned about a big fish she’s seen in the river. She told me it probably wasn’t a shark, but she wasn’t sure.
Pausing only briefly to admire the hat and tie worn by the normal people we had a few pints of Trout Pout and Slap & Tickled and we had a rather nice cheese board in lieu of a packet of crisps.

As I came back from the loo I had something of a (literally) sobering episode. Six years ago I had a nasty little episode at work in which I really did find out who my friends were. One chap with whom I had worked for over twenty-five years completely turned his back on me at the time. When I asked him for help he flatly refused to do anything, and told senior management that he wouldn’t help me. I met this chap in the Tickled Trout today; he grabbed my hand and pumped it like I was his best friend.

We had a few more pints then made our way to the railway station where we woke up a nice lady before coming home.
I got a kebab to share with the dogs, and we all scoffed it whilst watching “Little Shop of Horrors”. I had planned to do the ironing. It will keep…