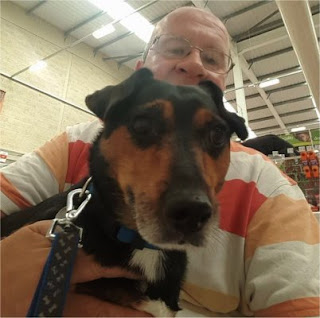 For all that I slept well I woke with quite a bit of pain in my dodgy elbow. I lay in bed hurting for a bit, but soon gave up sulking and came downstairs. I had a little look-see on Facebook and saw I’d upset someone last night. Yesterday evening I read a post about “the 2017 British & Irish National Geocaching Awards”. Personally I’m against this sort of thing. You could make a case for local awards because it would be reasonable to expect people to have seen everything locally that was to be judged. But how can anyone realistically vote on stuff spread all over the country. I doubt anyone would have first-hand experience of that about which they are being asked to vote. It is not fair for me to try to form a considered judgement on 30+ people, things and places when I only have any first-hand experience of only two of them (I counted).
And singling out half a dozen people’s efforts automatically dismisses everyone else’s efforts. Last year I must have organised thirty (or more) caching events, and over the last few years I’ve created over twenty Wherigos (and made some for other people). I bet this committee has never even heard of me.
I said as much yesterday when I was asked to vote on things about which I have no experience whatsoever, and this morning. I think I hit a nerve…
Mind you as the day wore on I had several messages telling me that I was right to have taken a stand against these awards. I didn’t realise that “the 2017 British & Irish National Geocaching Awards” have been a bone of contention for some time. Among the messages sent to me were the following questions:

Who are the committee who drew up the short list, let alone the categories?
What were the criteria for shortlisting?
Are all regions represented on their committee?
Who selected them?
Can they be called representative when only 800 out of 160,000 UK cachers have voted?

I asked; basically it seems to be the pet project of three self-appointed people. I suppose I should wish them luck; they are trying to do something constructive. I decided not to get more involved than I was already. Life is already one big fight.
I also sent out a message to several people about this Friday’s proposed geo-mission to London. Several people had said to me that they were going but never replied to the invite. Others said they weren’t going but had said “yes” to the invite. Most had said nothing… I shall be going to London anyway (I expect) but it would be nice to know if I should be waiting for anyone.

I got the strimmer out and then the lawnmower, and sorted out the lawn. Our lawn is in a terrible state; I blame the puppy. As well as holes where she digs there are bald spots which (I think)  is where she tiddles; I can remember reading somewhere that there is something in girl dog wee that kills grass.
I then spent ten minutes cutting back not-so-nice-next-door’s jungle and took Fudge to the vet’s.

The vet’s surgery has had a make-over. There are now two distinct waiting areas; one for dogs and one for animals that are scared of dogs. A good idea; there has always been an aura of incipient fight about the vet’s waiting area in the past.
We soon got in to see the vet. Fudge has a habit of dragging himself along the floor and he’s made the area around his “thingy” rather sore. The vet shaved the fur around the area. The sore bit was far more extensive than I thought. He cleaned it up and put some anti-inflammatory on it. We’ve now got to wash the area every morning and apply cream twice a day.

I then took all three dogs for a walk. We went to the co-op field where we met OrangeHead. She was on her own, and was as nice as pie with us. I must admit I found three dogs hard work.

Once home I cleaned up the back yard somewhat. I bagged up loads of rubbish then had a go at the fence. The panel I painted had been painted a light yellow before. It didn’t paint up as well as it might have done so I gave it a second coat. It looked better for that. I might go back and do some of the other panels.
As I painted my idiot hound carried on dragging himself around the grass on his stomach. I can see some enforced cage rest being necessary to heal his sore bits.

I had some lunch, and went to bed for the afternoon. I got three hours sleep with my puppy asleep on top of me. I got more fence painted, and "er indoors TM" boiled up some tea.
I’m off to the night shift now… probably via McDonalds. I hope it’s not as busy as last time…