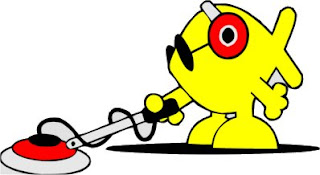 I slept rather well last night, but it hurt to move this morning. I looked out of the window to torrential rain. Somewhat ironic; weeks of dry weather, and on the one day I lift the garden membranes we get torrential rain.
The weather forecast is that it will all dry up in time for me to carry on in the garden tomorrow… here’s hoping.

Over brekkie (strawberry conserve) I watched an episode of “Detectorists” which was rather entertaining, and then I caught the end of “Thinking Tackle”; yet another fishing show presented by people with absolutely no TV presence whatsoever. There are a lot of fishing programs on the telly these days which are presented by people who seem hard pressed to string a few words together. I’ve often said to "My Boy TM" that we could make a TV fishing show. Perhaps we should?

I left home slightly earlier than usual; I went via B&Q for some hacksaw blades in the naive but optimistic hope that I might use them to saw out the post at the back of the garden that is giving me grief if the angle grinder fails. Realistically it's not going to come out by digging.

I then set off to work through the rain, and along rather busy roads.  As I drove the pundits on the radio were discussing the failure of ten years of the nation's forced austerity. Despite endless savings and cutbacks, national debt continues to grow. Apparently for every hundred quid the government raises in taxes it still spends one hundred and two quid. There is a theory that all the financial calculations were done on the assumption that the economy would be doing far better by now than it actually is. I'm reminded of my endowment mortgage. I was promised endless riches when that thing matured; in fact I ended up out of pocket. Perhaps the government should take a leaf out of my book and not spend whet it doesn't have?
They were also discussing how the Prime Minster seems to have found money to throw at problems in Northern Ireland far out of proportion to problems in the rest of the UK presumably in a shameless bit to keep the DUP on her side.  It seems there *is* money to be had then?

I got to work, and did my bit. Perhaps somewhat less than my bit as I was aching rather a lot. And with my bit done I came home. The plan had been to go to Rye for a meal with father-in-law this evening, but for various reasons he wasn't able to get along. So once home I spent an hour firstly finishing painting the new fence panel, and then giving two other panels a second coat.
As I painted all dogs tried to “help” me…

"er indoors TM" did a rather good bit of dinner, and we scoffed it together with a bottle of plonk whilst watching stuff off of the SkyPlus box.

Today was something of a dull day. If I wasn’t quite so tired and aching it might have been better…