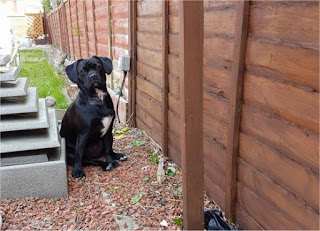 I slept really well despite the heat; post night shift does that. Mind you when it came to heat my piss boiled over brekkie. As I had my morning drag through Facebook I lost count of the amount of people spreading bitterness over yesterday’s Father’s Day. Just because they had a relationship break-up doesn’t make all men evil. I can hardly claim to have been (be) the best father in the world, but I’ve had a fair crack at it, and I do find all this man-hating vitriol rather offensive. Do people really not see that by saying “my ex is a git” they will garner sympathy, but declaring “all men are bastards” is just offensive?

I considered doing a little fence-painting after brekkie, but I decided against it. I didn’t have enough time before I was due at the dentist.
I got to the dentist with time to spare; after all it is only just down the road. I went straight in to the chair; the chap rummaged about in my cake hole and after a few minutes declared all was well. That was me done for another six months.

I drove round to collect "My Boy TM" and together we drove out to Sheerness to Whelan’s. Whelan’s sell the most amazing garden ornaments. Today we got all sorts of bits and bobs as well as the three garden planters I wanted. Over the years "er indoors TM" has planted all sorts of triffids in various plastic pots. They always die and the pots end up full of weeds.
No more.
We have nice planters now, She can plant nice bedding plants and look after them.

We were going to come home via Hastings and seeing my mum, but that was probably too much of a detour, so we went to the McDonalds in Bobbing instead. Once she’d taken our money the aggressive harridan in charge of the place announced that there was going to be a minute’s silence at 11am. We got our food, sat down, and she loudly announced the minute’s silence was starting. She then glared at me as we scoffed our dinner. Had we known they’d wanted us to have had cold food we wouldn’t have had dinner there. By the same token if we’d wanted to take part in a minute’s silence we wouldn’t have had an early lunch.

As it was (sort of) on the way home we stopped off at Bybrook Barn garden centre to look at the trees which go in pots. I’m still undecided about getting another potted tree. "My Boy TM" thinks I should get a palm tree. I don’t dislike the things, but I can’t say I really want one.
We came home and unloaded the planters. They were (and still are) heavy and awkward.

Although I’d got the planters today, in theory I wasn’t going to be putting them into action for a few weeks. In theory, today I wanted to get a new fence panel, dig out the old one and replace it, then do some landscaping.
In practice, the thermometer in my car said it was thirty-four degrees hot. Heavy work could wait. So I did the planters this afternoon. Firstly I had to prepare the area where they were going. That involved painting two fence panels. That would have taken an hour and a half had my dogs not been quite so helpful. (I use the word “helpful” in its canine sense here). As I painted I had the hose pipe topping up the fish pond; the water level was a few inches down.
With panels painted and hose pipe run out I then pressure-washed the planters. They had gotten surprisingly grubby in Whelan’s yard.
I then heaved the planters into place, put away the hose and washer and loaded an amazing amount of rubbish onto my car for a tip run tomorrow.

"er indoors TM" came home; what I had intended to spend a couple of hours doing had taken closer to six hours. She then took the dogs for a walk whilst I had a shower and a collapse.
I had intended to go over to the Windmill this evening; a friend had taken over the running of the place today. But I was just hurting too much to do anything other than sit in front of the telly.
I quite like sitting in front of the telly…