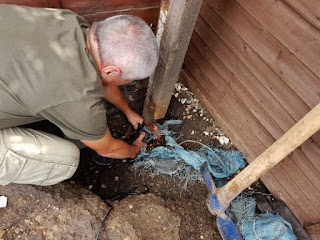 I was sleeping like a log when Treacle and Rolo decided to play chase all over the bed and Treacle woke me by treading on my goolies. I wasn’t going to get back to sleep after that.
Over brekkie I sparked up my lap-top and started into cyber-space.I got a little hacked off when I saw that the government is not relaxing the cap on public sector wage increases but still manages to find a billion quid with which to bribe the DUP. It amazes me how the Conservative (sort of) won the election when they openly pull this sort of stunt. Is such a blatant misuse of public money *really* less of a worry that what that so-called nutter Jeremy Corbyn *might* do?
Have I ever mentioned that I don’t agree with democracy?

I took the dogs round the park. As we walked Rolo reduced one small child to tears by simply walking in the child’s general direction. Rolo is perhaps the smallest dog you’ll ever meet and he walked within five yards of a child who went absolutely hysterical; pointing at the dog and screaming in absolute terror.
Stupid child.
As we walked through the Chinese garden there were a couple of people playing badminton. They’ve been there for the last week or so; they seem to love playing badminton there. Treacle tried to make off with the shuttlecock, but I was too quick for her.

We came home and crapped in the garden (the dogs, not me!). I cleared up, hung out washing, and set about fixing a small hole in the felt on the shed roof. Just as I got that done the door bell rang. Gordon had arrived with an angle grinder. Have you ever ground an angle before? It is rather exciting. We ground for about fifteen minutes with sparks flying in all directions until we managed to blunt the blade. The angle grinder itself was getting rather hot too, so we let the thing rest whilst we wandered round to B&Q to get a new grindy bit.
The new grindy bit did the trick; it wasn’t long before the problematical post was out of the ground. Or (to be precise) the bit that could be seen was out of the ground. We had a cuppa, and Gordon went on his way. I am *so* grateful for Gordon’s help today; without him I would still be there with a hacksaw.

With post removed I then got the new fence panel in place. Oh… how easy it is to write that. The old one had rusted in place and had to be removed in pieces. And then once I’d dragged and heaved the new one into place I realised that the screws I had to fix the panel in place weren’t long enough. So I went to B&Q, came back with the wrong screws and went back again.
Having wrestled the new fence panel into place I then put down new weed-proof membranes, re-laid the old ones and scraped as much of the shingle back into place as I could. I need some more shingle.

I thought about re-potting the monkey-puzzle tree but decided to paint the shed instead. That took three hours. As I painted I saw a seagull dive from the sky into the garden pond. I’m not sure if he got a fish, but this has convinced me to build a pergola over the pond sooner rather than later.
I finished painting the shed just as "er indoors TM" came home at 6pm.

"er indoors TM" boiled up a rather good bit of dinner; I’m going to ache in the morning. It’s something of a nuisance that I’ve still got physical jobs to do tomorrow…