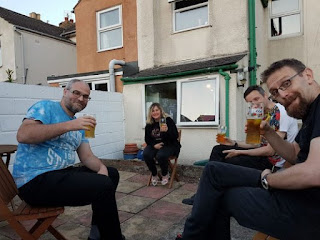 I’m not sure who caused the most fuss during the night. The puppy was quite restless, but then again "er indoors TM" was hardly silent in her fighting with the puppy. Eventually both protagonists declared a truce and I got an hour or so asleep.
Over brekkie I watched the fifth episode of “Detectorists” then had a look at the Internet. There was something rather sad on one of the Ashford-related Facebook groups. The off-licence round the corner is closing down. Several people were posting about how they were glad that it was closing down as they didn’t like seeing people sitting round the area drinking in public. I did snigger; are these people stupid? There are two other shops less than a minute’s walk from the off licence which stay open later than the off-licence and sell drinks cheaper than that off-licence ever did.
Interestingly there was an email from the South Ashford Community Forum about the offy closing. It’s going to be turned into a house. There were also emails offering me interviews for jobs in Norfolk, Huddersfield and Dumfries.
I also had a message via geocaching dot com telling me that one of my caches had gone missing (blah. blah… I can’t find it therefore it ain’t there) and two emails saying that other people had found that very same cache on the day that someone else didn’t.
I had a look-see before getting into the car. It was there.

As I drove to work the pundits on the radio were talking about new laws coming into force which govern how one brings up children. Bringing up children isn’t an easy thing to do. There is a wealth of stuff written about it in books and on the Internet; all seemingly from people who’ve never actually met a child. But what particularly worried me was one bit of the new law which says that if anyone tries to pass the blame for their failings then they will get a stiffer sentence.
Is that fair?
What if there *is* blame to be passed?
This struck a chord. Six years ago I made a serious professional mistake for which I was brought up before the professional regulator. It was truly horrible, but I shall gloss over the specifics. A week after I made my mistake there was another mistake in the workplace for which I was given the blame for what someone else did. In retrospect I think that was deliberate nastiness to stick the knife in, but again I shall gloss over the specifics.
Eventually the matter was reviewed in London where after a two-day trial I was (effectively) given a conditional discharge. But one of the chaps on the panel told me that they had held against me the fact that I didn’t meekly take the blame for the second incident.
I then spent much of the day re-living something I’ve spent years trying to forget.

But an early start made for an early finish. I came home to a beautiful afternoon. I walked the dogs round the block. A ten minute walk took twenty minutes as one of our number felt the need to tiddle every few paces.
I then got more fence painted, and thought some more about my next garden project. I want to re-landscape the area behind the pond to get rid of the splash pool (which just accumulates green slime) and replace it with a little stream. But to support the earthwork I will probably have to build a brick wall.
Where do you get bricks from?

"er indoors TM" came home. She had a dog-ladder to help get up and down from the sofa. I don’t think he quite got the idea; he and the puppy seemed more interested in ripping up the box it came in.

Being Tuesday we went down to Folkestone where we sat in the back garden of the Admiralty and listened to the local chavs having a fight. A passing social worker tried to justify their feral actions to us; I don’t think he realised that we didn’t really care…