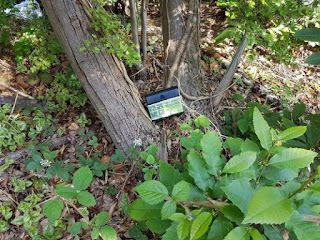 For once I slept like a log, and as I scoffed my brekkie my dog came out of his basket to see me. He’s not done that for a while. I gave him a good combing as I watched the second episode of “Dark Matter”. Fast-forwarding through the adverts cut sixty-four minutes of recording down to forty minutes. However it was a shame that the advert breaks hadn’t been planned by the broadcaster. The show had obviously been made with natural breaks where an advert break might be slotted in. But the sci-fi channel people had ignored that and had just randomly stuck adverts in anywhere, breaking the show seemingly at random.
With “Dark Matter” over I watched a little bit of “Total Fishing” (with Matt Hayes) then sparked up the lap-top. Little had happened overnight on Facebook, and I had no emails of note.

With a little time on my hands I thought I’d have a little geo-adventure on my way to work. Last night a geocache had gone live near Langley and seeing no one had logged a find overnight I thought I’d go for a First to Find.
I got the First to Find but…

Geocaching *is* fun but it sounds lame. And (to be blunt) caches like the one I found this morning do little to improve the hobby’s standing. I had a feeling it was going to be at the poorer end of the spectrum when I read the description. The on-line description of “colins tracable hotel” only had thirteen words written by the child who’d hidden it. Three of them were spelt wrongly.
The thing wasn’t hidden at all; I saw it openly at the side of the footpath from twenty yards away.
Billed as being a trackable hotel (*not* tracables”!) there weren’t any.
The cache had been put out by someone who clearly had very little experience of hiding and seeking sandwich boxes, and it came as no surprise to see from their profile that they had a grand total of zero geo-finds.
I can’t help but feel that the reviewers should do more to improve the quality of the hides. In this case they might have suggested the chap hiding the cache ran his words through a spell-checker, or at the very least re-read what he had written. (And to stem the critics who are itching to shout “dyslexia”, the dyslexic C.O.s of my acquaintance make the effort to check what they’ve written and to get someone to check it for them).
And they might have suggested that the C.O. find some caches first so’s he’d have an idea of what the hobby was about.
I see that during the day the cache has been re-named “colins stuff box” and that some trackables have been ordered…
I don’t want to discourage the kid, but he needs someone to give him some pointers.

As I then drove on to work the pundits on the radio were discussing Tim Farron. Until yesterday he was leader of the Liberal Democrats but he’s been having trouble reconciling his religion with today’s society. I must admit I think the chap is right to stand by his principles. All these gay Christians boil my piss. Have they ever read the Bible? It says quite clearly that being gay is wrong. So are these gay Christians picking and choosing which aspects of Christianity suit them and ignoring the rest?
For myself I’m all for gay rights. But (let’s be clear here) the Bible isn’t. And fair play to Tim Farron for sticking to what he believes in (even if it is patently nonsense).

I got some petrol, and made my way to work. I had a somewhat dull day today, and came home to find "er indoors TM" already home. We walked the dogs round the park. This was the furthest Fudge has walked since he hurt his back in the river three weeks ago.

We had a rather good bit of dinner, and then I spent a little while with needle and thread. I have an old pair of trousers I wear when painting the garden fence but the gusset has had it. Not much is kept concealed when I sit down to paint. I don’t want to scare the nice lady next door...
I shall test my needlework in the morning.