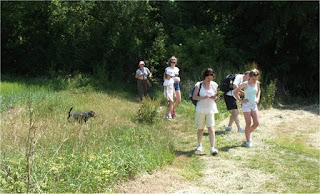 During a break on my night shift I read something on the Internet which amazed me. A couple in Australia claim they haven’t eaten for years. Instead they get their energy directly form the universe (!)
I did a little research. People actually believe this rubbish. People who advocate it are called “Breatharians” and despite every leading proponent of the fad having been exposed as frauds, stupid people still lap it up.

As I drove home I lost count of the number of cars which had pulled up on the motorway’s hard shoulder. Why were so many people stopping at 8am on a Sunday morning.

I got home and was promptly mobbed by my dogs. I had my ablutions, and over brekkie I prepped “Hannah” for the day’s adventure. I then looked at my dogs…
The forecast was for a hot day. Really they should have stayed indoors... But they knew we were going out; clearly they were expecting a walk. So we loaded up with lots of water and set off with the idea that if it all got too much we’d abandon and carry them back to the car.

In the week Karl had suggested a short walk around Hoath. Several geocaches had appeared round there over the last few weeks. A short walk would be ideal for today bearing in mind I’d been up all night and it was baking hot.
We met up, and once we were all smothered in sun cream we set off on a little walk.

We knew it was going to be hot; possibly too hot for the dogs? I don’t know but I do know they would have sulked if we hadn’t taken them. We had this idea to periodically drape the dogs in wet towels to cool them down. We draped them; I don’t know if it helped or not.
As we walked we took a little diversion into a wood for a cache which was only a hundred yards out of our way. As we hunted for it a voice called out “bet you’re looking for the same thing as me”. It was a fellow geocacher; someone I’d not met before. She’s been caching for three years longer than me, but has found eight thousand two hundred caches less. (There are those who say I am obsessed with hunting Tupperware). It was good to chat with a fellow cacher, and after a few minutes we went our separate ways.
As we came to the end of our walk we paused. The footpath went across a small runway, and we watched a light aircraft taking off.
Our last geo-find had us puzzled; we were all sure it was on private land. But with the last find found we made our way to the local pub for lunch.
Oh dear…

A combination of glorious weather and Father’s Day meant the place was heaving, Even all of the tables in the garden had been booked. We drove up the road to another pub where one of the locals took offence that we didn’t want to sit in the smoking shelter (as that was the only available table).
Eventually we made our way to The Crown in Sarre. Unfortunately we’d arrived too late for dinner, but on reflection that wasn’t quite the disaster it seemed. It was so hot I wasn’t hungry. Certainly for myself three pints of ale and a bag of crisps was an elegant sufficiency.
You really can’t beat a pint of beer with friends after a rather good walk. We’d only walked three miles today. Nothing really compared to what we often walk, but the heat and the night shift had taken their toll on me.
I slept most of the way home.

I took a few photos whilst we walked. Once home I posted them on-line. If nothing else my mum likes to see what I’ve been up to. I looked at the garden fence and decided against painting any of it today. Beer, heat and lack of sleep made me realise the fence will still be there tomorrow. Instead I slobbed about indoors until "er indoors TM" boiled up a rather good bit of dinner. She does that you know. And with her off bowling I spent the evening ironing. A dull chore but one which needed doing…