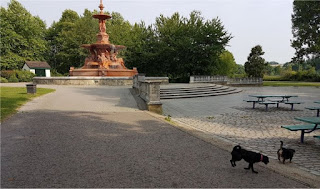 I slept well despite the heat. Over brekkie I saw that this blog had got a comment. Every entry has the option to leave a comment; sometimes people do so. The entry from 8 September 2010 had a comment today. On 8 September 2010 we had a new boiler fitted. Someone commented about that entry by telling me all about SEO Sparks of 385 Redding Rd #207, Lexington, KY. Apparently they drive targeted marketing to websites. Or just randomly spam blogs from eight years ago, depending on your perspective.

I took the dogs for an early walk; the idea being to get done before it got too hot. As we walked up the road we met a small child who said hello to “blue dog” and “pink dog”. This boy told me that my dogs are named after the colours of their collars and leads. That’s nice for them.
As we walked through Bowens Field we met a mad old woman who started screaming because my dogs were off of their leads, and she snatched her (leaded) dog up presumably before my slavering wolf pack ate her precious petal. As she ranted about how dogs should all be on leads I smiled sweetly, and made the observation that some people shouldn’t have dogs.
We walked slowly. Fudge was straggling. Just at the point where I thought I should pick him up he saw some other dogs of our acquaintance (a hundred yards behind us) and he set off to bother them like a bullet from a gun. He *can* put on a turn of speed when it suits him.

We came home; I put on old painting clothes and got another fence panel painted. I think I’ve got twelve more to do, and one to dig out and replace and then paint.
As I painted Treacle dug two separate holes in the lawn. Admittedly Fudge was a couple of years old when he came to stay (permanently) with us, and Treacle is only a baby. But Fudge *never* dug holes in the garden.

With the dogs settled I drove round to the tip. I seem to spend too much time there; I seem to feel somewhat possessive of the place. Today there were so many normal people about; all swarming. Not one was looking where they were going, either when carrying rubbish about or when driving in and out.
From the tip I went up to Aylesford pond shop for a new ultra-violet light for the pond filter. I also got some jollop to clear the green algae. But (as the man said) the sunlight is the cause of the algae. I have a plan to build a protective pergola over the pond.
Are any of my loyal readers any good at carpentry?

I was hungry so I went to the Aylesford McDonalds. The idiots in front of me had to be seen to be believed. The bloke had to repeat everything the assistant said to his girlfriend. they he had to poke her to get her attention and repeat himself again. Every sentence from behind the till was repeated, then (after a poke) repeated again. If only she'd put her phone down and ordered the food herself we could all have been out so much quicker.
It was ironic that once their order was complete she then had a major hissy fit because the boyfriend had paid and she had wanted to use her new credit card. I considered making the observation that it is amazing what you miss if you don't stay alert, but I thought better of it.

I got to work a few minutes early. It was as well that I did; the car park was full. I eventually found a space, and as I walked through he car park to work I was amazed at just how many people were sitting in their cars with the engines running. Presumably to get the benefits of their cars' air conditioning?
Once at work I did my thing (as I do). Having a late start meant that I could get so much done before work, but a late start does make for a late finish…