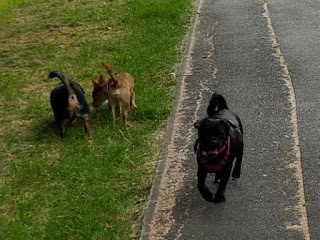 Yesterday was the longest day of the year; consequently last night was the shortest night. The night shift certainly didn’t seem that way. Following a particularly quiet night shift last Saturday I had to do a serious amount of work last night.

As I drove home the pundits on the radio were talking politics; the proposed alliance between the Conservative party and the DUP is looking rather iffy. The DUP are demanding vast sums of money for Northern Ireland, and who can blame them?
I got home just as "My Boy TM" arrived. He was dropping off our house guest; little Rolo is staying with us for a week or so whilst he goes off on holiday. Treacle got incredibly over-excited about Rolo, but eventually she calmed down.

I had this plan to got to sleep right away before the day got too hot; I got a couple of hours sleep before the thunderstorm woke me at mid-day. Over a very late brekkie I had a look-see at the Internet.
Facebook was entertaining; there are some people on there that I have known for years and who I see on a regular basis. There are others I rarely see, and social media is a good way to keep in touch. And there are those who put every single sordid detail of their soap-opera lives up for all to see. I have a few people like that on my friends list and it makes for such entertaining reading. Some people really do believe that Eastenders and Coronation Street and “reality TV” are real and they too try to lead their lives in such a way that even going to the toilet is cause for drama.
One such chap has been kicking off for the last day or so; having been jilted by a girlfriend he has publicly fallen out with the girlfriend’s family, posted pictures of his progress through a bottle of whisky, posted rather sad attention-seeking videos, and was at mid-day posting remorseful stuff about how his boss had sent the social workers and the police round to his flat.
This evening he posted an apology for his carrying-on. He shouldn’t apologise – I love it. Is that mean of me?

I then turned the telly on and watched a drama based on the exploits of Sir Ernest Shackleton; the Antarctic scenery made an interesting contrast to the ongoing heatwave. But the storm soon passed, and I realised that the fence wasn’t going to paint itself. Two hours (or so) saw two more fence panels painted, and it was time to drive out and collect "er indoors TM" and take her to the garage where her car had been in for a service.

We walked all three dogs round the park. Rolo seems to be constantly harassed by Treacle. He goes out of his way to pick fights with massive dogs, but lets Treacle terrorise him.

I think I’ll have an early night – I’m worn out.