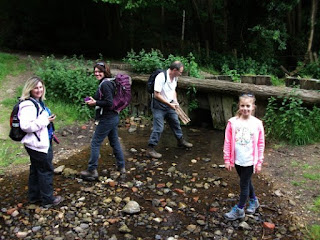 Despite a really busy day yesterday I was up silly-early this morning. As I scoffed my toast I saw that overnight there had been another cowardly so-called terrorist attack on innocent people going about their business in London. People again used vehicles to mow down passers-by.
What do they hope to achieve with all this? When the IRA mounted its terror attacks forty years ago they had a clear agenda, they warned the authorities of an attack so that property was destroyed but people could escape harm, and you had a vague idea of what was going on.
The current spate of attacks are just mindless thuggery. Are they being made by Islamic terrorists? That seems to be the general consensus of opinion. But with no one declaring responsibility it is just mindless murder.

Seeing how it was still well before 7am and it was a bright morning outside I got some old clothes on and set about garden work. Yesterday nice-next-door helped me move the monkey-puzzle tree; this morning I got the fence behind the tree painted, and I also got the bit of fence painted that I fixed yesterday. I might be able to put that back into place tomorrow. We shall see.

Fudge wanted to come out today, but he wasn’t up to it. We gave him his tramidol and settled him in his basket, and we then set off. We went via the co-op where I was massively over-dressed (everyone else was in their pyjamas) to Hosey Common near Westerham where we met Tracey, Karl and Charlotte. We then went for a little geo-stroll round the W2LC (Westerham to Limpsfield Chart) series of geocaches.
It was an ideal day to be walking; not too hot and a gentle breeze was blowing. As we walked we saw cows in a river, and a heron. Treacle ran in terror from other dogs, and we met the sweetest pair of dachshunds. We had fun exploring an old folly, and we found several ant-hills. We even took a little diversion into Westerham for a couple of pints.
Geocache-wise this was a good walk. Some of the hides were “film pot under a rock”, some were more challenging, and some were very difficult. Some were very imaginative. But we found all of them. Mind you (not counting our little diversion to the pub) there were twenty-four caches along a route which could have had thirty-five or so; they were a little spaced out. That’s not a bad thing, but I found myself wondering if we were walking past the end points of geo-puzzles without realising it.
Also, like so many other geo-circuits we felt the distance quoted was underestimated. Admittedly we took a diversion to the pub, but that couldn’t have been more than a mile in total. The walk was billed as approximately five miles, “Hannah” (my GPS unit) measured the total distance walked at a tad over eight and a half miles.
As always I took a few photos as we walked.

I slept all the way home; I had intended to paint more fence, but by the time we got home my heart wasn’t in it. "er indoors TM" boiled up a rather good bit of dinner and went bowling. I settled down in front of the telly…