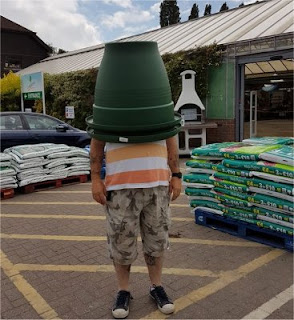 The puppy woke with one loud woof at 6am. I wonder what had bothered her. I dozed fitfully for a while, and finally gave up trying to get back to sleep just after half past seven. Over brekkie I stared into cyber-space with a bit of a sulk. I’d had a *really* good evening yesterday, but it seemed that ninety per cent of the universe that hadn’t been in the pub with me had been to the Electric Light Orchestra concert in Wembley. Would I have wanted to go? At two hundred quid a ticket... probably not.
I expect the DVD will be released soon…

I drove down to Folkestone; Steve and Trudy were in the throes of moving. My elbow really stops me doing much in the way of heavy work these days, but I got a couple of tip runs done. I can take stuff to the tip. I’m not sure what I was expecting to do, but I had been expecting to have done more. I was on my way home by 11am.

I came home to find "er indoors TM" washing the carpets. I took a few minutes to fix the front fence. Clouting it with a hammer worked wonders. I then got another fence panel painted before lunch.
After a bit of cheese on toast we went on a little shopping mission. First of all to B&M bargains where I got more fence paint at half the price that Tesco sells it for. I also got some weed resistant membrane, and I looked at the price of planks of decking. I want a humungous flower pot but the ones I have in mind cost hundreds of pounds. If I saw up some lengths of decking I can make a wooden planter for about fifty quid. That might be a way forward.
We then drove round to Bybrook Barn garden centre where I got a couple of large-ish plastic flower pots. If nothing else they will act as soil storage whilst I’m landscaping over the next week or so.
And we stopped off at B&Q on the way home too,

With walk done I got my paint brush out and set about the fence. As far as painting it, the end is in sight. Not counting the panel I want to replace I have three and a bit panels left to do. But they are big ones, and inaccessible too. With those painted I really need to paint the shed, then look to re-landscape the end of the garden with a view to digging a fence panel out. With that panel dug out I need to replace it. Then I’ve got to make good all the digging and do something with the displaced soil.
And I want to build a pergola over the pond too. Never a dull moment.

Over dinner we watched yesterday’s episode of Doctor Who. It was rather good. And with "er indoors TM" off bowling I watched the last episode of “Jamestown”. The story has been left wide open for a second season.
I then spent an hour or so working on my work-related blog. I really should keep that up to date more than I do…

We didn’t go for our usual big Sunday walk today. I quite missed it…