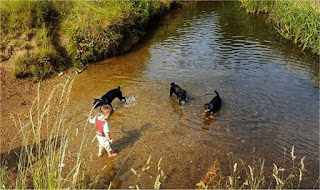 Despite sleeping well I did have several vivid dreams last night. Waking at 6am to find my car wasn’t sinking in a swamp came as something of a relief. I got up and over brekkie watched an episode of “Jamestown” in which bosoms heaved and antimony was mistaken for silver. I’m reliably informed that this is a common mistake in certain circles.
When telly was over I went straight out to the garden and put the new ultra-violet lamp into the fish pond filter and chucked in the stuff to sort out the algae. I got a fence panel nearly painted when "Daddy’s Little Angel TM" texted to say she was on the way round. I got cleaned up and we took the dogs to the river. The idea was to get the dog walk done before the day got too hot, but despite being earlier than usual it was still hot.
The dogs enjoyed playing in the river, but Sid did struggle with the heat.

Pogo and Treacle played like mad things; I heard Fudge yelp as though in pain a couple of times and I assumed the puppies had crashed into him. But I was rather suspicious when he yelped when I could see the puppies were twenty yards away in the other direction. So I watched my dog intently and a few minutes later I caught "Stormageddon - Bringer of Destruction TM" kicking him. Little brat!
His mother unleashed some serious whoop-ass on him; he won’t do that again.

There was a minor catastrophe when I got home; there was water all over the floor. I cleared up the mess and spent a few minutes trying to find where it had come from. I suspect the dogs’ water bowl got knocked as the washing machine seemed fine.
I got another fence panel painted before it got too hot to continue, so at that point I sparked up my lap-top and had a look-see at the Internet.

I’ve had to make a tweak to the settings of this blog. If anyone wants to make a comment on my rantings they will have to log in via their Google account to do so and use the verification thingy; I had half a dozen spam comments overnight and I don’t want to encourage them.
Mind you on a more positive note I got asked if I would share my Wherigo wizardry with a chap in Australia. I was only too happy to do so. I wonder what the Aussies will make of playing Snakes and Ladders?

With the hottest part of the day past I went off to bed for a couple of hours. I had hoped to have slept longer but it was too hot. Rather than laying awake sweltering I went out to the garden and pootled. I got another fence panel painted and cut back the jungle pouring over the fence from not-so-nice-next-door.
"er indoors TM" came home with some bedding plants for the new planters. In retrospect buying them at lunch time and leaving them cooking in her car for the afternoon might not have been the best way to have transported them, but they are now in the planters. I wonder if they will survive?
I’ll have a look in the morning after the night shift…