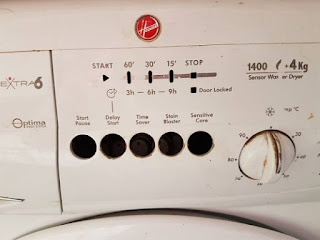 I woke a little earlier than I might have done. Over brekkie I watched the fifth episode of “Jamestown”; I’ve been watching it on the catch-up TV thingy on the SkyPlus box. But even so a forty-minute show downloads together with twenty minutes of adverts. I had to fast-forward through three minutes of crap before the show even started.
I’m surprised that TV adverts are still a current “thing” and haven’t disappeared into memory with beta-max and the Sinclair C5. After all who watches TV as it is broadcast anymore? Doesn’t everyone record what they want to watch and fast-forward through the adverts?

With telly watched I sparked up the lap-top. Pretty much nothing had happened worthy of mention on social media overnight, and I had no emails worth mentioning either. So I got some of the details about the washing machine (that "er indoors TM" had broken) and once I’d made a fuss of my dog I set off to work.

In a welcome break from things political the pundits then wheeled on some old duck (I can’t remember who she was) who was having an ongoing fight with pretty much every university in the land. She was a leading writer of historical fiction, and she said that because history doesn’t record the petty details, she makes them up. The universities don’t like this as the general public are forming a view of history which is totally at odds with what actually might have happened.
This is nothing new; think about Captain Bligh on HMS Bounty. I bet you picture a short evil little git. The reality was rather different (leaving aside the facts he was a lieutenant and the Bounty wasn’t an HMS) but everyone pictures the Hollywood representation.

It took me an age to get to work; the traffic was terrible. Once there I took a few minutes to finalise the arrangements for fixing the washing machine, and then had a rather good day.

Once home we walked the dogs. As we walked some little shit on a pedal bike shouted “Oi Baldy” at me as he passed. For all that I try to make light of it I actually hate, loathe and detest being a slaphead. Had the child been going any slower I would probably have physically yanked him off his bike and given him a slap.

With dogs walked I washed some shirts. Despite the washing machine being all but destroyed "er indoors TM" has figured out a way to get the thing working by ramming a screwdriver into the works. It made some odd sounds as it churned, but I eventually got eight shirts scrubbed and I ironed them whilst watching another episode of “Jamestown”.
I’ve now caught up with catch-up TV. The next episode s on Friday. In the meantime I think we’ll l eave the washing machine alone…