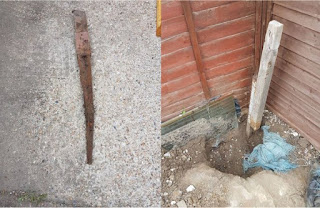 The works car park empties onto a short stretch of dual carriageway leading to some traffic lights. I had been sitting on that stretch of dual carriageway for ages this morning going nowhere when a bus driver walked over to the police car which was in the queue in front of me. Being a naturally nosey person, I turned the radio off and wound down the window to see if I could hear what was being said. (Tell me you wouldn’t have done the same!) Apparently the traffic lights just ahead of us were broken. Every direction had the traffic light stuck on red, and the junction was in a state of mayhem with everyone taking pot luck on going through the red lights.
If nothing else that explained why we were moving so slowly.
We eventually got to the traffic lights and got through. And the police car kept going. I would have thought that this was somewhere that the police should have got involved and taken charge. Obviously these Boys in Blue thought differently.

I came home to dog mayhem. All three were running riot. I suppose it was a good sign that Fudge wasn’t sulking. I eventually managed to get him to roll over, and with the help of "er indoors TM" I washed and cleaned his tummy which was looking rather red.
"er indoors TM" set off to work; I set off to B&Q where I met Sam. As I’ve mentioned I needed a new fence panel. A fence panel costs nineteen quid. B&Q want twenty-five quid to deliver the thing. It took us ten minutes to carry it home. "Daddy’s Little Angel TM", Sid and Pogo met us outside B&Q, having just delivered "Stormageddon - Bringer of Destruction TM" to nursery school.

My arm was rather numb by the time we’d carried the fence panel home, so "Daddy’s Little Angel TM" made a cuppa and I explained my plans for the garden before they went off on their way and I went to bed for a couple of hours.
I woke, and had some strawberry conserve on my toast for brekkie. I got the strawberry conserve from Aldi last night before work. It is basically jam for people who like paying twice the price. I’ve often wondered what strawberry conserve is; now I know.

I put on some old clothes and had a look in the garden. One thing rather led to another. Having planned to do the landscaping work on Thursday I thought I might save a little time by raking back the shingle in readiness. That only took a few minutes so I thought I might lift the membranes too. And then I thought I might shift some of the soil. And then I thought I might as well see if I couldn’t dig out that old fence post that was supposed to be Thursday’s project.
As I started digging I found an old met-post sunk in the ground. Regular readers might recall that I put this met-post into place on 8 October 2006. The post was still perfectly functional, and it took me about two hours to get out. But I got it out. Eventually.
I then turned my attention to the post I actually wanted to remove. I spent about an hour before giving up. There is a problem getting this post out in that once I’d dug sown some eighteen inches I saw some obstacles in the way of removing the post. On one side is a tree root about as thick as my arm. Of the other is the concrete pillar holding in the fence post that I don’t want to damage.
I gave up. Sam’s going to fight with it tomorrow. If he draws a blank I shall take a hacksaw to it, and if that fails Gordon has an angle-grinder.
Whilst I was in a working mood (don’t happen often) I thought I’d paint the fence panel we got this morning. If all goes to plan I shall be putting that into place later this week. I got it half done when the rain started.

With "er indoors TM" off out this evening I had been left to my own devices. I fed the dogs, then foraged for my dinner in the general direction of KFC. As I scoffed my KFC I watched the film “Platoon”. An odd film; I had to read Wikipedia to see what the plot was (if indeed it had one). Rather than having a plot the film seemed to rely on explosions and swearing to entertain.
I turned it off half way through.

I think I need an early night. A night shift last night and an afternoon’s hard labour… I’m worn out.