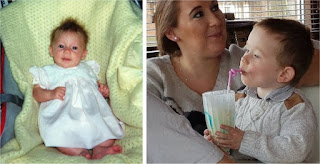 Bearing in mind how early I usually wake I had intended to get a good two hours fence painting in before "er indoors TM" surfaced from her pit. However I’d not considered the after-effects of a couple of night shifts. Despite being bitten on the arse a couple of times during the night (either by "er indoors TM" or the puppy; I’m not sure which) I didn’t wake until gone 8am.
I got up and had a quick look-see on-line over a bit of toast. A few ex-colleagues had commented on the death I mentioned yesterday. I’ve been thinking about the chap who died. He was an odd lad; something of a loner. I can remember making several overtures of friendship to which he never really responded. He didn’t seem to have any close friends in the workplace. I wonder if the management under which he worked had noticed that?
I also read quite a bit of political stuff on Facebook. It would seem that a lot of younger people of my acquaintance have decided to find out for themselves the ins and outs of politics. It is interesting that (without exception) all of them feel that the Labour party is the one with their interests at heart. Perhaps Mr Corbyn’s message is getting over despite the best efforts of the national press. Or perhaps it is because the Labour party are the only ones who are actually being seen to offer anything. All the pro-Conservative stuff I’ve read basically either says “Vote for us because we’re better than Labour” without any details to back the claim whatsoever, or just tries to appeal to people’s natural greed.
On a happier note quite a few people were commenting on "Daddy’s Little Angel TM"’s birthday; which was kind of them.

And talking of which we then collected the birthday girl (and her entourage) and drove down to Broccoli Park (as "Stormageddon - Bringer of Destruction TM" calls it) and we had a little walk. I was glad that for once it wasn’t our puppy disgracing herself. For all that she’s not averse to eating poo, at least she picks it off of the ground. This morning her brother Pogo ate it fresh as it emerged from Sid’s bum; so fresh that it didn’t even touch the ground. How feral is that? "Daddy’s Little Angel TM" went seriously mental at little Pogo. I did laugh; mainly because it wasn’t my dog.
We walked round the lake and looked at the fish, then had a little birthday picnic. It soon became apparent that not only had Pogo eaten poo, he’d also rolled in it. So we walked back round the lake where he “accidentally” fell in.
Ironically Pogo was sick in the car only two minutes before we got home.

Once home, ably assisted by “nice next door” I set about fixing the fence. I say ably assisted by “nice next door”; in fairness he did all the work. We got the new fence post support in place as well as the new panel, and I was able to salvage enough out of one of the old panels to be able to fix the custom-sized one (which was a relief). And I got the custom-sized panel pretty much fixed. I would have liked to have got it painted but I just had time for a quick shower and scoff before Steve and Sarah arrived.

We settled the dogs, collected Chris and set off to Whitstable where we discovered a new micro-pub. “The Twelve Taps” had twelve taps all dispensing a different ale. I had a rather good pint of stout followed by a citrussy light ale. My Ham Street Lover then arrived with Julie and a littlun, and Matt and his family weren’t far behind.
As luck would have it, “The Twelve Taps” was right next door to the theatre; "er indoors TM" had organised for us to go see “Avenue Q”. Tonight was the fourth time I’ve seen it live. But I’ve got the CD; I know all the words to all the songs. It was an absolutely brilliant production. Can’t wait till we go again; I wonder when that will be…