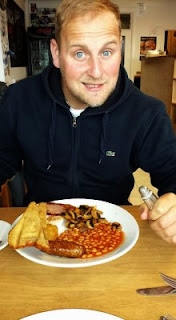 Despite having spent much of yesterday yawning and telling everyone just how tired I was I only slept for about five hours and lay awake stroking a sleeping dog for an hour or so before finally getting up well before 6am. I'd slept with an ear full of olive oil (having had the thing bunged up all week) and it finally seems to have cleared.
Over a bit of toast I had a look-see on-line. I got just the teensiest bit cross. Last week we had the in-out Euro referendum. Thee "outers" won. Like it or not, that was the result. This morning (only a week later) many of those who (loudly) voted "out" were posting pro-remain propaganda on social media and also posting rather hateful stuff about those who'd led the "out" campaign.
Anyone who reads this drivel will know that I don't agree with democracy because a large part of the electorate (often including me) really don't have a clue what is going on.... I might have mentioned this before...

I popped the lead onto "Furry Face TM" and we went for a little walk round the park. It had rained overnight and everwhere was wet. So my dog chose the soggiest place imaginable to "drop his load". And he has developed an annoying habit in that when he "drops his load" he drops one bit then walks on before dropping the next bit, eventually leaving it along a trail of six feet or more. It takes some clearing up; especially when in grass taller than the dog is.
As we squelched on with soaked trainers we met OrangeHead's dog who was being walked by someone who looked like a younger version of OrangeHead. A Mark II version perhaps?
We also met lots of young families on their way to school. Some of the smaller children were on bikes and were being constantly shrieked at by mothers who were concerned that the children were too far ahead of them. I watched one such family with amusement. Mother was forever screaming for the child to slow down, and the child was forever falling off of the bike.
Have these mothers never cycled before? It is *very* difficult to cycle at a walking pace; probably beyond the ability of the average six year old. These mothers should either cycle alongside their children, or leave all the bikes at home.

However, apart from "Furry Face TM" trying to pick a fight with a bus, our walk passed off relatively well. Once home my dog had his brekkie and I drove off to meet "My Boy TM" for a spot of brekkie. You can't beat a fry-up. Or "frip" as they are known.

With brekkie scoffed out plan was to go to Cheryl's grandfather's farm where much of "Daddies Little Angel TM"'s stuff had been stored when they moved house over the last winter. By a process of elimination I'd determined that my ladder was either there or it was lost. I'd last seen the ladder at their flat in Folkestone and I was sure it had gone to the lock-up. Cheryl was adamantit was not.
We arrived, opened the lock-up, and the first thing I saw was my ladder. Finding my ladder was like being reunited with an old friend...