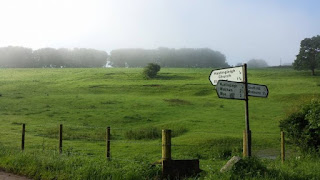 It was a very warm night; I didn't sleep that well. I eventually gave up trying to sleep and came downstairs shortly after 5am. I let Rolo out to do his business, and once I'd done mine I went out to find him. He wasn't in the garden. I spent a frantic five minutes trying to find him only to discover he'd gone back to his bed.

Over brekkie I watched the most recent episode of The Sky at Night which I'd recorded onto the SkyPlus box a while ago. It featured the whirlpool galaxy; it was rather good. That's something I've not said about his show for some time.

Being a geo-calendar day I set off to work rather early. There was one cache which was vaguely mid-way between Ashford and Canterbury. I say "vaguely" - in the back of beyond would be closer to the truth. I navigated the back lanes and finally found my quarry in a rather pretty valley.
Feeling flushed with geo-success I thought I'd get a second cache. Today is the last calendar-filling day when I am scheduled to be at work, and there was a cache near work which I had been holding in reserve as a back-up plan (even though I've failed to find it three times previously). I'd seen it had been recently replaced to I went and thought I'd have a go. After five minutes I gave up with the GPS and went with the hint which had been given, and found it some fifteen metres away on the other side of the road from where the GPS would have me looking.

I got to work and cracked on with the early shift. I had a rather busy day. Can't say I liked it very much. I consoled myself with McScoff then went on to astro club. It was a very good evening. An excellent talk, and an excellent stallarium show from Stevey. Things seem to be looking up with the club.

Oh - and the referendum results are in. I feel it speaks volumes that Nigel Farage (who was one of the leading llights of the "out" campaign) is disowning statements made by his campaigners, people who voted "out" have changed their minds less than a day later, and sterling has plummeted to a thirty-year low.
But what's done is done. Generations yet unborn will look back on today as being momentous. I *really* hope those generations will see today's result as having been the right one. Of course we will never actually know as we will never be able to compare what happens with what might have been.
But those who propose future referenda would do well to reflect on today. Those who were in the majority were not gracious in victory; those who were in the minority were bitter in defeat. There is now seriously bad feeling where there was once friendship.

I suppose that it will all blow over. Time will tell. It always does...