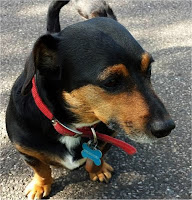 I woke to find my little dog was not on the bed. I came downstairs to find him curled up on the sofa. He immediately trotted to the back door and I let him out. Once I'd shaved I saw he was still in the garden. Just sitting on the lawn. I called him; he wouldn't come in. I went to him and he cowered. I fussed him a little but he still was very subdued. I tried to pick him up but he backed away.
I came in and then I saw what the problem was. Four rather large piles of dog sick. He'd had a pork bone for his tea last night. There was a lot of meat and soft crackling and fat on it; it had been too much for him.
As I cleaned up the sick so he sheepishly came in and looked at me from a distance. Poor little pup.

With dog sick eventually cleaned up I set off to work. As I drove I was conscious of a white van only a few yards behind me. This van kept its (far too close) distance until the dual carriageway on the town's ring road when it came alongside me. I did chuckle when I saw the van. It had a large logo of "Centrex Safety First" on its side, and the passenger door was stoved in where it had obviously had a previous accident.

I was listening to the radio as I drove. Clement Freud (now six years safely dead) is the latest celebrity to have his name dragged through the mire. He has been accused of having interfered with two children. Once in 1952 and once in 1974. On the one hand I would say that his accusers have left it far too late to say anything. On the other hand the fact that his wife has issued an apology rather than a denial makes me wonder if she knew something was going on but said nothing.
Like all of these cases I can't help but feel that there is no hope of proving anything (one way or another) from such a far remove in time.

I got to work and did the early shift. I quite like the early shift - I'm an early sort of person. I quite like starting at 8am. I'd start earlier given the choice. And an early start makes for an early finish.
I came home to find my little dog was still rather subdued. Normally when I come home he doesn't stop barking until we go for a walk. He didn't make a sound this evening. We went for our walk, and he stayed at heel for nearly the entire walk.

Once walked I got the lawn mower out; it was a bright evening and lawns don't mow themselves. Now I've got the grass short I hope to keep it that way.
Mowing the lawn worked up a sweat; just as I got out of the shower the doorbell rang. Some newbie geocachers had managed to open the geocache in my front garden and thought they'd say hello. I was impressed. Finding the box is easy; it is *huge*. Opening it however is a difficulty five puzzle. These people had it solved (with just tthe teensiest help) and have a geo-score of less than twenty.
Whilst "er indoors TM" was at aqua-aerobics I sat with my (still quiet) dog and watched another episode of "This is England 90". I've nearly watched all of that show now; I wonder what drivel I can watch next.

"er indoors TM" will be home sooon. I wonder what's for tea...