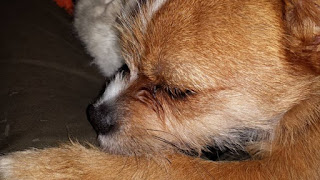 Despite a relatively late night and the best efforts of my CPAP machine I woke at 5am unable to breathe. The CPAP helps, but it can't do much when my nose is completely blocked. This is especially annoying on days like today when (being on a rota-ed day off) I had no need to be up so early. I got up, and spent a few minutes searching for my dog. He'd chosen a rather odd place to sleep; I was beginning to panic when I couldn't fiind him.
Over brekkie I watched the penultimate episode of "This is England". This episode was something of a disappointment. There was little in it other than one long argument.

With telly watched I spent an hour or so doing on-line preparations for the new geo-series I have planned to release over the summer. It is amazing how long it took to acheive so little.

I then popped the lead on to "Furry Face TM" and we set off to met friends. As I drove Warwick Davies was being interviewed on the radio in "Desert Island Discs". I've mentioned before what an odd show this iis. Sometimes it is really interesting; other times third-rate has-beens pretend to be pretentious. Warwick Davies was really interesting. He spoke openly and franklly about his dwarfism, and chose eight musical pieces that people actually listen to.

We got to Headcorn, parked up and soon found everyone else. Five of us (and two dogs) went for a little geo-stroll. We started on a busy road, but soon found ourselves on rather pretty lanes. It wasn't the longest of walks, but it was ideal for the morning. A walk in the coutryside with good company is always an excellent way to spend time.

Once home I had a bite to eat then seeing how the forecast rain hadn't arrived I carried on with the current garden project. I need to lift the brindle chippings so the fruits of my loin can help me lay fresh weed-resistant membranes. I'd got about a quarter of the job done when the rain started.
I've filled one of the garden dustbins with brindle chippings. If any of my loyal readers have a spare dustbin I could borrow for three weeks to put more into...

I then cracked on ironing shirts. They don't iron themseves. And with shirts ironed I carried on with the preparations for the summer's geo-picnic. I've now sent details of nine possible hides off to the reviewer to see what he says.
I then spent a little time telling the world about next week's meeting of the astro club. I wonder if the world will take notice.

Jimbo and Stevey arrived, and we went round to Steve and Sarah's for a bit of Chinese followed by an evening of cards. Arses were handed (on plates) in various directions, and it was suggested that having the seven of clubs was reason enough to win a hand.

When I got home I saw that our house guest haad arrived. We are dog-sitting my great-grand-dog Rolo. Rolo is my grand-daughter's dog. He is about a quarter of Fudge's size but is very obviously top dog in the family pack hierachy. He is with us for a week. Let's see how this goes...