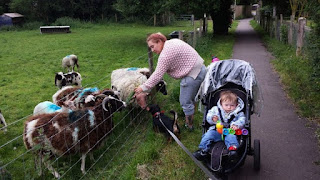 I had an early night last night. I woke at 4am and sprinted to the loo. I'd had some peanuts yesterday; was it those which had made me feel so grim last night?
I tried to get back to sleep; I gave up shortly after 6.30am. Over brekkie I had a look on-line. Some Portugese lady had sent me a friend request on Facebook. There is no denying that she had a quite spectacular chest but there is more to life than epic bazoomas and so (in a rare moment of morality) I deleted her request. I suspect that she would only use her "charms" in a shallow attempt to sell me stuff. There's a lot of that about.
My new dustbin came on for some criticism; it was branded a fire hazard. Apparently grass cuttings in those bins start to ferment and get rather hot. One lives and learns.

I walked down the road to the doctor’s. They open their phone lines at 8am so I had this idea to be on the doorstep as they opened and so beat those making the phone calls. I got there ten minutes early only to find I was fourth in the queue. However the three people in front of me were all offered an appointment at 8am; all three turned it down, preferring to wait till later in the morning. (What was that all about?) I snapped up the chance of getting seen early.
But despite having the first appointment I was still five minutes late in getting to see the doctor. Mind you I was in and out in five minutes. For all that my bruise has subsided I have a quite substantial lump where the bruise was. Bearing in mind lumps are always best checked out I thought I’d better get it seen to. It turns out that I have a subcutaneous haematoma - thrombosis which will go on its own over the next few weeks.

I came home via the bakery, collected "Furry Face TM" and (after a quick spell in Trap One) went round to see "Daddies Little Angel TM"; today was her birthday. The birthday girl was in fine form and we walked out to McDonalds. Regular readers of this drivel may recall we walked out there on Monday and it was still being built. Apparently it opened on Tuesday.
We had McBreakfast and came home. As we came home me and "Stormageddon - Bringer of Destruction TM" blew raspberries at each other. He is quite good at doing them.

On the way home I stopped off at Pets at Home where I went to the vet’s section and got my dog weighed. He’s lost one tenth of a kilogramme since his last weigh-in, which is something of a result.
Once home I put some washing on, scoffed the cake I’d bought earlier and had a rummage through my letter rack. For once there wasn’t really much of note in it. I then went to the loo for the thirty-fifth time today and thought about having some lunch. I thought better of that idea. The earlier McBrekkie had been somewhat anmbitious; I settled for a bit of ice cream then set about the ironing.
I suppose several trips to the loo did add to the amount of time I was ironing. I've not done any for a while; it had somewhat piled up. As I ironed I watched a film. I'd recorded "24 Hour Party People" beccause it starred Steve Coogan. Usually I like things with him in them. But this film was something of a disappoinment.
Eventually the ironing was done and I got the hoover out. The carpet was covered in fragments of things the dog had destroyed. How can such a small dog make so much mess?

I then spent a couple of hours on my latest Wheri-project; it is now ready for field trials. And just as I was finishing the thing "Daddies Little Angel TM" phoned. Dinner would be ready soon.
I wandered round to Newtown and we spent a rather good evening winding up "Stormageddon - Bringer of Destruction TM". Not only does he put his hand up when I shout out "Hands up who loves Granddad" he now blows raspberries when I ask "What do we say to Nanny?"
He's a good lad...