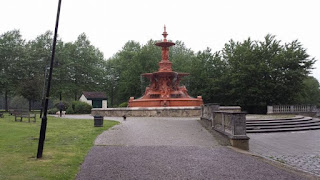 I was again up far too early this morning, and on finding no episodes of Dad's Army on the SkyPlus box (Saturday's episode was cancelled because of the tennis at Wimbledon) I put on an episode of the Irish equivalent of "The Joy of Painting". Effectively it was Bob Ross with a brogue... in the past I've been scathing about the program but it grows on you.
Today the star of the show was painting over the top of a pre-existing picture. An interesting idea; I should get my paints out again and have a go.

I set off to work. The news was abuzz with all sorts of stories. The referendum has caused some chaos; not least of which in the Labour party. The leader, Jeremy Corbyn, has been told in no uncertain terms to resign by pretty much all the Labour MPs. But as he was elected by a landslide majority of the membership of the Labour party he was refusing to go.
I'm sure he's a decent chap, but the press have clearly decided against him. There is never a news article about him in which he is not made out to be an idiot. And there was a *lot* of scandal following his election with all sorts of allegations that loads of Conservative supporters had joined the Labour party purely to elect a twit as the leader.
It is sad that history repeats itself. In the 1980s the Labour party deliberately made itself unelectable, and it is doing so again.

There was also talk of loads of deposits of helium having been found in Tanzania. That will put a spanner in the works for the space program. With a world wide shortage of the stuff helium mining on the Moon looked to be the only way to secure a supply of the stuff, and consequently something in which private enterprise might invest.
But Tanzania is much easier to get to...

As I drove along the A28 this morning I was very conscious of a van not five yards from my back bumper all the way. if any of my loyal readers need new floorings I wouldn't advise Clarks floors & carpets.

I got to work, and spent quite a bit of the day looking out the window. The morning was one of bright sunshine and the forecast rain which was due to start at mid day didn't start. There was a geo-walk planned for the afternoon. I would have liked to have gone along but getting the afternoon off had proved to be a tad problematical.

Mind you the rain did start when I was on my way home, and I got rather wet whilst walking "Furry Face TM" round the park this evening.
I then spent a little while planning for the weekend's geo-rally. We've not had one of those before. I *think* we can visit eight counties...