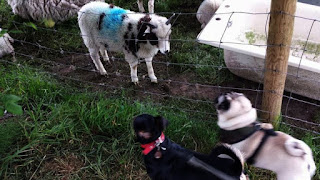 I did the night shift; much as I say I like the night work it can be rather lonely. Just as I was leaving to come home this morning my phone beeped with an email. A friend from years ago had contacted me throught LinkedIn. I first met Phil at Red Lake Primary School some time in the early 1970s. We went on to Hastings Grammar School together and were in the Boys Brigade. We spent many nights fishing on Hastings beach, and did a *lot* of under-age drinking in Ore village's lamented Hare and Hounds.
We rather lost touch when Phil emigrated to Sweden in the early 1980s; and I last saw him some time in the early 1990s.
It made me think about so many other dear friends I've lost along the way.

I came home from work and took myself off to bed for a while. When I woke I took "Daddies Little Angel TM" to the hospital for "girls things". I have no idea what it was all about: I drove her there and slept until she'd had enough.
We came home via a rather circuitous route which took us paast McDonalds. "Daddies Little Angel TM" devoured a Big Mac; I climbed outside of a McTexMex and a McHoneycombe McFrappe. Very tasty.
We came home and collected "Stormageddon - Bringer of Destruction TM" and the dogs and went for a little walk and went round to South Willesborough where we chatted with the goats for a while.

"er indoors TM" came home and went off to aqua-aerobics, and I watched Monday's episode of "Game of Thrones". For once I didn't fall asleep half way through. Nudey-Dragon-Girl kept her charms under wraps in this episode. I thought that was a shame...