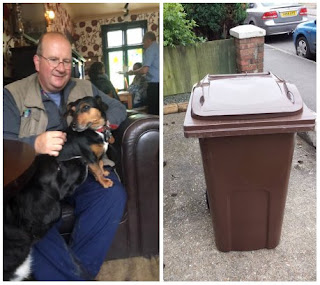 I suppose that after two night shifts it is to be expected that I slept well. I got up and had a look on-line to see what had changed overnight. I had a friend request on Facebook. My mate Phil (from Sweden) has added me. I got to see a photo of him. He's changed... but in the twenty-odd years since I last sw him that is only to be expected.
But he still has most of his hair and (unlike me) he's not piled on the pounds. That would be the Swedish lifestyle. I can remember him telling me off the last time we met. We went for a meal - he had a jacket potato and I had chips. He wasn't impressed with the chips "So British" he said. In retrospect he was right

I popped the lead onto "Furry Face TM" and we set off. I had intended to use the dog seat belt today, but the thing's straps need a little attention (i.e. need to go back to the shop). But despite this minor setback we soon made our way to Downe where we met Gordon and Norton. The threatened rain held off and we then had a rather good walk through the countryside. I was rather pleased to find that the field puzzles I'd attempted from the comfort of home had all been blagged correctly and we found all that we set out to find.
There was an interesting episode when we found two caches within twenty yards of each other.... I suspect the geo-police will soon be on the case.

After our walk we popped in to the Queen's Head in Downe for a crafty pint of British Bulldog before taking a rather circuitous route home. There were road works on the way home that Google Maps didn't know about and the sat-nav was insistent on driving me along closed roads. I eventually got home via Bromley and Sidcup.

Once home "Furry Face TM" had a bath (he had a rather grubby tummy) and as the washing machine wrestled with my shirts I watched Monday's episode of "Gotham". It was rather good.
I then had a little look at the geo-map to see if I could find somewhere for a walk next week, then ironed some shirts whilst watching a classic episode of "Upstairs Downstairs". Mrs Bridges had run amok. She does that from time to time.

"er indoors TM" came home and announced the garden waste bin had been delivered. It was in the front garden. From now on I won't have to do tip runs every time I mow the lawn. In my world this is rather exciting. I posted a photo of the new bin on Facebook. Although there were one or two who appreciated it, I don't think the world at large quite appreciated just how monumental a new dustbin can be.

With dinner scoffed we went out for the evening "Rogue Princes" were playing for the first time everr at the Windmill. On arrival we met several friends, and then I bought what I can only describe as a rather overpriced pint of beer which was well past its best. We chatted for a bit, and as the band was about to start I asked for a pint of lager and was given cider.
The band started. I think there was something wrong with the sound system. I couldn't hear the singer at all.
I came home and had an early night. I was suddenly feeling like death warmed up...