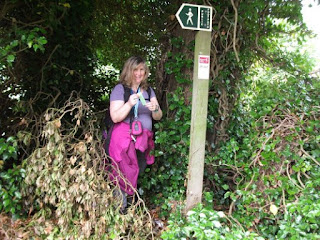 There is a virtual geocache in Guildford.... The idea is you go there, find a particular landmark of interest and answer a question about it. I'd looked the place up on Google images some time ago and thought I had the answer. I had since revisted my findings and confirmed my answer. Yesterday evening we drove a round trip of close on two hundred miles to get there and claim the find. On arrival I had a good nosey about. I found that which I was expecting to find from my research, and despite a good search I didn't see anything new to me or unexpected. So I sent an email with my answer to the chap to whom the answer was to be sent.
This morning's haul of emails had his reply: "Sort of coulda guessed that… but I’ll let you have it… "
Clearly I've missed something. I'm intrigued as to what.

The Internet was quiet on the referendum's aftermath. Probably just as well. I programmed "Hannah" for the day, solved a geo-puzzle that we actually found on today's walk, put the wet stuff from yesterday out to dry and we set off.

Loads of us met up in one of the back streets of Teynham, and then made our way along the road to meet loads more. I've rather lost count of how many of us came along on today's geo-expedition.
We had a really good walk. When we started I made a point of putting on my wellies (bearing in mind the torrential rain of yesterday). But I was wrong to have done so; there was only really a couple of muddy points on the walk. Thirty-odd geo-finds, a cock on the church (oo-er), a picnic in the sun and even a pub half way round. A good way to spend the day.
And with the walk done we popped into the Swan in Tenyham for another crafty half.

I took a few photos whilst we were out. I put them on-line whilst watching the live coverage from the Glastonbury festival. The Electric Light Orchestra were playing live.
As a child my old mucker Dave Thornton introduced me to ELO. Over the years their music has always featured prominently in the noise I play in my car. I was quite excited to see they were playing live... I was rather disappointed.
Only one member of the original line-up was on stage; I had no idea who all the others were, and I did notice that the obviously foxy ladies playing the violins and cellos all looked rather disinterested. And whilst the songs were all my old favourites, I felt vaguely disappointed.
I'm not sure what I was expecting, but I was expecting more...

I've now got to re-program another Wherigo for the national geo-congress in August .