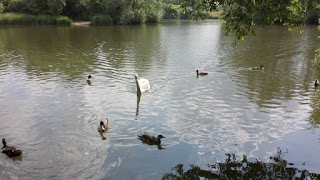 Apart from spending five minutes chasing an errant pigeon, the night shift went as well as night shifts go; if nothing else I had some time when I could have the radio on. Tony Hancock, Alan Partridge and Doctor Who were my companions for the small hours.

I had a little trouble getting home. Some organised group of cyclists had taken over the entire A28 to be their race track. These cyclists all thought they were on a par with cars; all cycling in the middle of the carriageway. I eventually navigated my way past them all and got home where I spent ten minutes clearing dog poop from the garden, hanging out wet laundry and loading the washing machine.

Whilst I waited for "Daddies Little Angel TM" and "Stormageddon - Bringer of Destruction TM" to arrive I had a look on Facebook. The pro-Brexit brigade were posting on-line in force. They amaze me. Most people who loudly advocate leaving the EU cite reasons which are absolutely nothing to do with the in-or-out referendum. Admittedly immigration by a points system (like Australia has) would be nice, but that is not on offer. Illegal immigration is a problem, but leaving the EU will not affect it. Apparently the elected European Parliament is not democratic whereas the unelected House of Lords is. People want British laws for British people whilst not realising just how few of the laws in the UK come from Brussels. And many of the nastier comments are prefixed with "I'm not a racist but..." as though claiming not to be racist allows you to be as racist as you like.
I've often said that I don't beleive in democracy. The EU referendum is a classic example of why I don't. So many people clearly don't understand what they are actually voting for.

"Daddies Little Angel TM" and "Stormageddon - Bringer of Destruction TM" soon turned up. I'd had an idea to drive down to Hastings to see my Dad for Father's Day but having been up all night meant I was probably a little too tired to drive. So instead we took the dogs for a little walk through the park to the lake to feed the ducks. It was a warm day, "Furry Face TM" and Sid roamed off the leads; Rolo stayed on his lead. He is still something of an unknown quantity.
Once at Singleton Lake we fed bread to the ducks whilst "Stormageddon - Bringer of Destruction TM" fed bread to the dogs. We were having a good time until Rolo picked a fight with a swan. We made a strategic withdrawal at that point.
It was then that we noticed that "Stormageddon - Bringer of Destruction TM" had lost his teddy bear. We retraced our steps and eventually met up with "Orangehead" who had found the teddy. How embarrassing.
Pausing only briefly for Rolo to try to fight with two Alsatians we returned homewards.

As I was hanging the washing out on the line I heard a plopping sound and some frantic splashing. Rolo had fallen in the garden pond. Silly dog.
Despite having been awake all night I managed five hours sleep. Longer would have been nice, but it wasn't to be.

I'm off to another night shift now. Hope "er indoors TM" gets that washing in from the line...