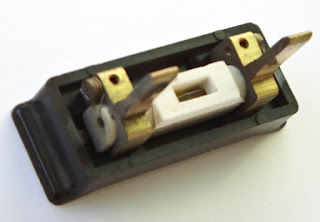 It is no secret that I feel my dog doesn't drink enough. He likes milk but the vet says it is not good for him, so every evening I fill a small bowl with water, add enough milk to colour it and he yums it up.
Last night as I was preparing his "white water" all the lights in the house suddenly went out, but the telly stayed on. Obviously the fuse had gone. After a bit of torch-lit farting about I replaced the fuse and it promptly blew again. I immediately knew this was a problem beyond my ability to fix, and I went to bed.
Surprisingly I slept well, waking seven hours later to find I was hugging my dog like a teddy bear.

Over a rather dark brekkie I updated my blog archive this morning, and got a little cross with social media. I've ranted before about stupid people. Some people have taken offence at my rantings. I'm sorry, I don't want to give offence but are people *seriously* so thick that they do not understand why Nigel Farage cannot take over as Prime Minister? (or as "priminister" to quote the thick element)
I then dug out the "home emergency" insurance details. I left them for "er indoors TM" in the hope that we were covered (she's better with "home emergencies" than I am) and I set off to work.

As I drove the pundits were discussing the current political climate. The Labour party remains in deadlock and the Conservative party is fiddling while Rome burns. There was a lot of talk about Boris Johnson's decision not to stand in the election for their next party leader.
Some say he's been stabbed in the back by his political opponents. Others say that he's been cowardly in not facing up to the chaos he has created. I can't help but wonder if he's been rather clever. Whoever takes over as Prime Minister will inherit an impossible position. I suspect that after six months whoever is then Prime Minister (or "priminister"(!) ) will be forced to resign having been made the scapegoat for the current political mess. And at that point Boris will be billed as the saviour of the nation.
Whether he will actually save the nation or stuff it up even more remains to be seen...

I got to work and spent the morning plagued with visions of the entire house needing rewiring. "er indoors TM" sent a message at about 10am to say the electrician had arrived, and had asked when the house electrics were last checked. My heart sank; but on reflection surely they had a once-over when the loft conversion was done about twelve years ago? After several messages to and fro I finally got the news that the fault had been traced to the light fitting on the upstairs landing. That will need replacing very soon, and we've got a recommendation to get a new consumer board. Bearing in mind the old one still has Bakelite fuse holders from about seventy years ago, I don't think that is an unreasonable suggestion.
I wonder how much that will cost?

As I arrived home my phone beeped. A message from "Daddies Little Angel TM"; apparently my grandson "Stormageddon - Bringer of Destruction TM" has learned a new word. He can now say cake.
I got home; it is amazing the difference having a light in the toilet makes. It was rather good to be able to see what I was doing. I then ran "Furry Face TM" round the park, programmed "Hannah" for the weekend's planned extravaganza and was all set to whizz down to Capel for the astro club's observing evening when I got a message that clouds had stopped play.
Just as well that message hadn't come five minutes later...