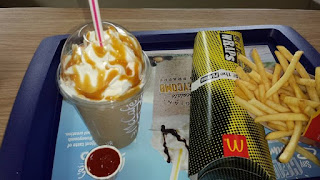 Another good night's sleep. Over brekkie I spent a little while wrestling with the laptop. Because I am something of a cheapskate I don't have MicroSoft Office. Instead I have OpenOffice which does pretty much the same thing and has the added bonus of being free. However over the last few months the spell checker has died. I've tried pretty much every fix there is but to no avail. I tried some more this morning and it either recognises every word as being spelt correctly or is thinks every single word is wrong.
So (despite my proof-reading) when you find spelling mistakes in these blog entries, that is my excuse.

Being on a late start I had some time on my hands, so I took "Furry Face TM" round the park for a walk. We had what I can only describe as a "near miss incident" with a jogger. Fudge doesn't seemm to like fast moving things and he expressed his dislike. The jogger tried to get arsey but I told him to take his earphones out, look at the world around him, and to try to avoid running right over the tops of small dogs. Suitably abashed the jogger went on his way.
Fudge then got rather wilful. Something in a bush had his attention. I tried to call him away but he ignored me. He can be quite funny when he tries to ignore. He takes no notice of what I say, but when I say his name his tail starts wagging. Clearly he could hear me but was ignoring me.

We had what I describe as a "quick" walk but we were still out for about an hour. Once home "Furry Face TM" had his brekkie then I ran round with the hoover, organised a walk for Friday, and set off to work.

I left for work a little earlier than I really might have done, but today was a geo-calendar day. I had planned to go somewhere near Etchinghill, but just as I left home my phone beeped. I had a notification about a new geocache in Herne Bay. I thought I might chase the First to Find so I set off to the coast.
As I drove "Women's Hour" was on the radio. This is a show about which I have been rather scathing in the past but today's episode was quite interesting. Mary Berry (of "Bake Off" fame) was the guest editor. She started off with talking about the fun she'd had as a child in the Guides. There was then something about how she loves her garden. Normally a dull subject but she brought it to life. This was followed with something of a rant about how texting can never replace a well-written letter, and she ended by talking about the increasing popularity of all sorts of crafts.
It was a rather interesting three quarters of an hour, marred only by the fact that I got to Herne Bay to find that someone had beaten me to the FTF.
I made my way to work via McDonalds for a McPiriPiri wrap, a caramel McFrappe and a McSulk. Mind you I shouldn't grumble; I needed a geo-find today and I got one.

Once at work I did my thing. And we had a visitor. The inestimable Soup Boy called in. He worked with us for a while, and is currently on a sabbatical with a view to becoming a professional runner. He called in to say he has decided that he won't be returning to us.
I was rather sad to hear that; I like my mate Soups, and miss I him.

Soon enough it was home time. "Game of Thrones" is on in a minute...