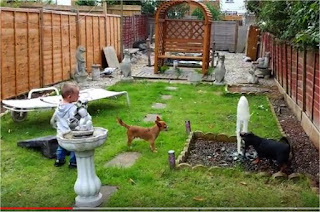 Yesterday evening I watched little Rolo with amazement. Fudge always has a few biscuits in a bowl down for if he is hungry. Most dogs would wolf them down. Fudge never has done so; he leaves them and just has one when he is peckish. Yesterday evening Rolo took several of those biscuits and hid them in various places round the living room. This morning he went round to his hidey-holes and ate them.

I then had a look-see on-line. It rained yesterday and social media was awash with everyone grumbling about typical British weather. This morning no one was saying anything; I wonder just how many people realised how good the weather was today.

I put the leads onto two dogs and then walked round to meet "Daddies Little Angel TM" and "Stormageddon - Bringer of Destruction TM". "Daddies Little Angel TM" was rather concerned about a potential zombie apocalypse and had some theory that it might be prevented by nanobots created from puffer fish stem cells. Apparently her ideas had a factual basis in science (!) I took the line of least resistance and just agreed.
We walked round the back of the Stour Centre almost as far as the rugby club, looped round the town centre and discovered a new field which led us to Godinton Road. We came home through the park where I finally plucked up the courage to let Rolo off of his lead. He was really well behaved; played "chase" with Fudge and came back when called.
The plan was to go our seperate ways, but on hearing that I was intending to crack on on the garden "Daddies Little Angel TM" came home with me and helped rake up brindle chippings. We probably spent an hour or so tidying up and getting ready for a concerted garden day in a couple of weeks' time. As the most recent fruit of my loin worked I played silly beggars with Jake, the dogs and the fountain; I put up a video of what we did. And then "Furry Face TM" had to have a bath.

As a reward for all our hard work I got us some KFC. I didn't get exactly what I'd asked for. And when they gave me half of what I'd ordered and I asked for the rest, they tried to charge me five quid more. I tried to argeu wit them, but after five minutes struggling I realised that life is too short to argue with someone who hasn't got the faintest idea what you are saying. (Am I being very nasty and racist when I say that for all that I do like KFC, in thirty years of living in the same road as that shop they have *never* employed anyone who speaks English with any degree of ability?)
But what we did get was rather tasty and we scoffed it whilst watching SpongeBob.

The younger two generations set off homewards, and I mowed the lawn and scraped a few more brindle chippings. I would have liked to have done more, but there is only so much scraping that one can do. So instead I consoled myself by zooming round the living room with the hoover before spending an hour or so on astro club bits and bobs. As I bitted and bobbed I discovered a problem with emails sent to BT Internet addresses; they all seem to bounce back.

I then slobbed front of the telly for a bit watching last night's episode of "Game of Thrones". After several episodes of absolutely nothing happening, last night's episode had quite a lot of fighting and battles. It was all rather exciting (even if absolutely nothing was "flopped out"); mind you I'm not entirely sure who is squabbling with whom and why they are squabbling. There is only one episode left in this current season. I can't help but feel that once I've seen that it wouldn't hurt to watch the entire lot from the start.

Being Tuesday the clans gathered; tonight in Willesborough. We put the world to rights then watched The Flash take on a mutant rampaging gorilla. Sooner The Flash than me...