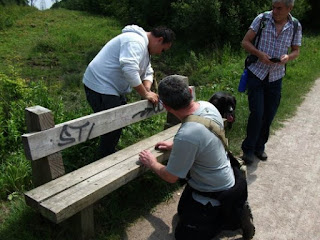 Yesterday evening I could have gone out telescoping but having had a busy day I just wanted to slob out in front of the telly. This morning's haul of emails brought advance warning of a telescope session in a few weeks time. Clouds allowing I might just be up for that.
I also received an exclusive invitation to participate in a live webinar led by the De Vere group. Aparently this would "allow me to see what a typical day of working for the group consist of and the earning potential. They would also outline the desired skills that they are looking for in me. This might allow me to gain a deeper understanding of what they are looking for and whether I think this amazing role is a perfect fit for me".
I think I will pass on that one.
I then spent a few minutes putting the final touches to my latest Wheri-project. I say "final touches" - as yet I have no actual final location but as far as the programming goes an actual location is just piddling details.

Realising that today was one of my rostered days off I'd booked an appointment with the dentist. He rummaged around inside my gob and gave me the thumbs-up with the proviso that I visit the hygenist in a week or so.
Once dentally approved I came home and did some weeding in the garden until my trousers split. They obviously couldn't stand the strain. I've got one side of the garden weeded, but it is only a temporary fix. Many years ago (3 November 2006) I had a couple of tons of brindle chippings (red stones) delivered and on 3 March 2007 I used them to gravel the sides of my lawn. (I can pinpoint these dates you know - isn't recording history useful !)
In the intervening years grass and weeds have grown through the wed-resistant membranes and gravel. The bamboo edging has fallen to pieces and the edging stones are now listing at forty five degrees. I need to spend a day rebuilding the garden. I need to pick up those tons of brindle chippings then replace the weed-resistant membranes, re-point the edging stones and re-lay the brindle chippings.
And then I need to re-bury the membranes round the pond (the stones have gone all over the place) and make good the little wooden box the leccie is in by the pond. I'll also need to get more shingle and sort that lot too. And there's a broken fence panel behind the shed which needs replacing.
I've some holiday coming up.... I might just do that in early July. If any of my loyal readers fancy a day's back-breaking work for the price of a pint or two...

I changed my T shirt and put the lead on to "Furry Face TM". Gordon soon arrived and we drove out to Clowes Wood where we met Matt, Sid and Sam. Five of us (and three dogs) had a rather good walk around Clowes Wood; even if the dogs did get a little grubby.
From Clowes Wood we drove up the road for a little way. There was a cache there for which I'd spent ages searching a few months ago. Despite no apparent intervention from the cache owner I saw the thing had been found a couple of weeks ago. I found it within a few seconds today. I suspect shenanigans - it certainly wasn't there last time, and the one I found only had one previous finder.
Flushed with success we then drove to the coast. There is a multi-cache which requires visits to several locations. I'd actually been to those at various times before work over the last few months. It turns out that I wasn't alone in having done this. So having already collected the clues we all got to do the secret geo-ritual at the final location.
Ice creams, a little stroll along the prom, an hour's geo-wander around Tankerton, and then home.

I'd taken a few photos whilst we'd been out. Once home I popped them on-line for the world to see, then I saw I had an email. The secretary of Challock Parish Council has given permission for me to stage a geo-picnic, so I did the paperwork and hopefully it willl be published and in everyone's diaries soon.
I'm glad she's given permisson; I've put quite a bit of effort into my latest Wheri-project hoping that Challock would be good. I've now put the first version of it on my phone; I intend to test it out tomorrow - weather permitting. And while I'm there hopefully plan out a new geo-walk to replace the one I put out last summer.

We settled "Furry Face TM" (not that he neded much settling) and went round to Someset Road for the Tuesday evening gatheing of the clans. We watched a rather good episode of "Gotham" and while we waited for the storm to abate we watched "oddbods". Baby Jake likes it, and so do I....