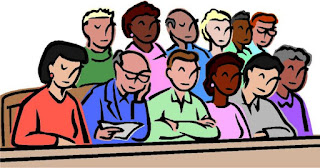 As I worked last night I had half an ear listening to the radio. Much of it was repeating what was on earlier last night or the previous night. But a news item in the small hours made me think.
Two jurors have been found to be in contempt of court and have been given suspended sentences.

The first case is one with which I have every sympathy. One of the jurors did his own research on the chap over whom he was sitting in judgement. And having found this chap already had a criminal record he then told the rest of the jury about it. The judge got wind of this and decided that the trial had to be abandoned at a cost of eighty thousand pounds. Apparently jurors aren't supposed to do that.
I must admit that from my personal experience of the legal system, those advocating for and against the accused never seemed to actually want to get to the truth of the matter. They seemed far more interesting in posing and making themselves look good in front of the judge. Actual facts were somewhat secondary to their posturing. If I were I in a jury the sole purpose of which was to be an audience to such showmanship I can't help but feel I'd want to do my own research.
The second case is perhaps slightly less black-and-white but still understandable. A juror who felt the accused was not guilty was in the minority. The majority of the jury felt the accused was guilty, a majority verdict of guilty was given, and the accused went to prison. The juror who disagreed with the majority then wrote to the chap who'd gone down. In her letters she apologised that he'd been imprisoned and she assured him she'd fought for him in the jury room.
I've never done jury service. From what I've heard both in the media and from people who have I can't help but feel the system needs a shake-up.

With a rather busy night shift done I made my way home. As I got home my phone beeped. "Daddies Little Angel TM" was raring to go for a dog walk. So I popped the lead onto "Furry Face TM" and set off to meet her.
We ran into each other just by Asda. I had something of a shock. Liitle "Stormageddon - Bringer of Destruction TM" has had a haircut. He looks so different; he looks so grown up.
We then took a rather circuitous route to the e-cigarette shop. As we walked we met a nice lady with two rottweiller-akita-cross puppies. They were six months old, really sweet and playful, and the size of cart horses. She seemed worried that we might have an issue with her dogs, and she was delighted when we suggested that all the dogs might like to play together. The dogs were having a whale of a time when some silly old prat appeared from nowhere. He had two small dogs on leads; both dogs were clearly straining on their leads wanting to play with our dogs. But this old prat was having none of it, and started screeching that our dogs should all be on leads - "It's the law" was his catchphrase. I tried to explain that dogs are allowed off the leads in that park, and that dogs like to play but he was having none of it. He just stood like a stuck record spouting "It's the law". After a few minutes I gave up and told him (rather abruptly) that laws he makes up in his head don't apply to me and I turned my back on him.
"Daddies Little Angel TM" didn't actually tell him to get knotted, but the sentiment was there.
The nice lady with the rottweiller-akita-cross puppies seemed pleased we'd stood up to this twit; I got the impression that he's bullied her before and she wasn't sure of herself enough to argue with him.

We eventually got to the e-cigarette shop and once equiped with e-baccy we came home where I then went to bed.
I got up shortly after 4pm, then carried on with "project garden". I mowed the lawn and strimmed the edges, then carried on pulling the weeds out of the bridle gravel. I got one of the garden waste dustbins scrubbed; I now need to start scooping the brindle chippings into said bin with a view to making the gravelled areas good again.
Whilst I was pootling I turned on the water features. Two seem to have packed up since I last turned them on. They will needd fixing aat some point.

After a rather good bit of dinner "er indoors TM" went to the Windmill for Sam's party. I'd sent my apologies. I'd also declined the offer of a game of cards this evening. These last two night shifts have taken their toll, and I've been asked to cover tomorow's day shift. I need to be out of the house before 7am tomorrow.
I think I might have an early night...