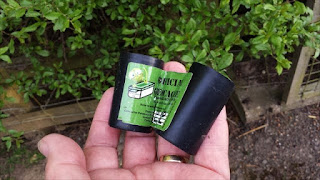 After the exertions of yesterday I had something of an early night last night. I slept like a log until 1am, then lay awake for much of the rest of the night. I gave up trying to sleep and got up shortly after 5am. I then wasted ten minutes trying to find where my sandwich box had been hidden. Whilst we had been on our Cornish holiday the girls had come round and tidied up. Whilst they did it with all good intentions I now can't find anything...
Over brekkie I watched "Dad's Army" then set off to work far earlier than I really needed to. Mind you I was at something of a loose end, and being a geo-calendar day I needed to go locate some Tupperware.

My first target was in the back of beyond along a narrow country lane. On arrival I could see the geocache; laying broken on the roadside. The thing was smashed in two. I couldn't say whether it was deliberately broken or not but I had my suspicions. This one had supposedly been hidden for the local scouts. From my own experiences of thirteen years as a scout leader I would *never* involve scouts in geocaching. Whilst most would enjoy the silly game, I can picture the faces of half a dozen who wouldn't rest until they had personally destroyed every last one.
It was as well it was still early; despite this minor setback I still had time to drive down the road a bit further to get today's geo-calendar filler. Only eight more days to fill now.

As I drove the radio was spewing drivel; having had a week's holiday I've got rather out of touch with reality (as dictated by Radio Four).
The Prime Minister was warning that leaving the EU may well destabilise Europe. His critics were decrying him, but I've said this all along. Just look at the history of Europe. Hundreds of years of war and now co-operation. Admittedly it may be co-operation about the standardisation of bananas, but it's not war.

There was also concern expressed that official figures about death rates in hospitals might not be quite as reliable as one might hope. It transpires that one is as likely to die over the weekend when in hospital as at any other time. In fact one of the pundits being interviewed (who was a professor-sir) said that in fact patients get better treatment at weekends; mainly because with far fewer out-patient clinics going on, staff can concentrate on the acute in-patients at the weekends.
However I got the impression that the whole discussion was more about political squabbling rather than about achieving anything practical.

There was also quite a bit of talk about today's transit of Mercury across the face of the Sun. An expert was wheeled on and the pundits asked him all sorts of facile and banal questions. I couldn't help but wonder if the people asking the questions really were as stupid as they seemed.

I stopped off at Morrisons for supplies, and then got some petrol. I was still far too early for work. So I sat in the car park and used my phone to have a look-see on-line for half an hour.
There was a minor embarrassment when I got to work; that missing sandwich box had been in my locker for the last week. Woops.
I got on with the day; work was much the same as when I'd left it before my week's holiday. And with my bit done I came home again.

I walked "Furry Face TM" round the park; "er indoors TM" drove round and picked us up just before the rain started. We had a rather good bit of scoff, then she went bowling.
I've made myself comfortable in front of the telly... Game of Thrones is on soon, then it's Gotham...