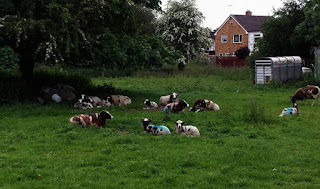 I slept like a log last night. It is amazing how a full day's walking does that for you.; I woke to find myself cuddling a sleeping small dog as though he were a teddy bear.

Over a bit of brekkie I organised a littlle walk for later in the week, If any of my loyal readers find themselves at a loose end on Thursday, a walk round Downe might be a good way to spend the morning. I realise a lot of people will be at work mid week. But I won't be.

Bearing in mind that "er indoors TM" had plans to take "Furry Face TM" out today I walked round to see "Daddies Little Angel TM" and "Stormageddon - Bringer of Destruction TM". We then walked out to the McDonalds in the orbital park only to find they workmen hadn't finished building it yet. It had recently been demolished to make way for a bigger one. As I drove past the othher day it had looked open. It looked like a building site today.
Instead we went to see the goats at the farm and went back to "Daddies Little Angel TM"'s flat for a cuppa and to watch a bit of telly. "Almost Naked Animals" was quite amusing; even if I have reservations about whether it makes suitable viewing for an eighteen month old.

I came home to find "er indoors TM" was out but "Furry Face TM" was in. I was rather cross; I could have taken him with me earlier.
I set about mowing the lawn; after half an hour's effort "er indoors TM" turned up; she'd been shopping. She then took Fudge off to the Bank Holiday geo-barbecue whilst I had a shower. As I got out of scrub my phone rang. "Daddies Little Angel TM" was in intense pain. She'd phoned 111 and they'd suggested calling an ambulance. I *could* have taken her to the hospital myself but (as she said) she'd get immediate service if she arrived in an ambulance. There are those who might feel that I should have taken my little girl to the hospital. However after all these years taking her to hospital has something of a "been there, done that" about it.
Instead I gave her instructions to text me any developments and I took myself off to bed for the afternoon.