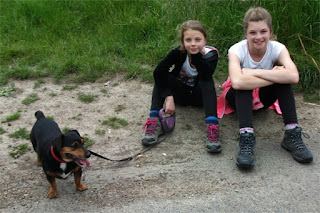 I woke this morning to find my left arm was wrapped around my dog, and my right elbow was rather painful. Perhaps I overdid it somewhat yesterday?
Over brekkie I solved a few geo-puzzles and then checked my emails. One of them was something of a complaint about the series of geocaches I'd put out round Bethersden last year. The person writing to me was polite but they said "For me really, it was a bit too long, I had an operation for a new knee three months ago, so it really was a test, and there is literally nowhere to have a sit down!! A pub halfway would have been great, or even a bench. For our lunch we sat in a damp field to eat our sandwiches.... When we were halfway through I realised I had had enough, my knee was getting painful, but of course we were about 3.5kms from the car. We then had to decide to continue the route or take the quickest way back to the car. We chose the road, but it was very busy, not a pleasant walk..."
I took a deep breath. Geocaching is a hobby which requires a little skill with map and compass. You *don't* have to be Bear Grylls to look at an ordnance survey map to see there are no pubs on the route. And I clearly said in the instructions that the route was one of eight miles and the terrain was a tad challenging.
Is it *really* my fault if they didn't read the instructions or plan their day properly?

In a novel break with tradition "er indoors TM" was ready before me this morning. We drove round to the co-op, then on to collect Suzy-pup (and her entourage) before heading up to Tenyham for today's geo-adventure.

Relatively recently three series of geocaches had gone live around Teynham. I'd had chats with the chap who'd hidden them. He felt that each series could be done in about three hours. So the theory was we'd walk the first series, have a spot of lunch in the pub then walk the second series. If time allowed we would press on and do the third.... I thought this was a good plan.

We met up with the gang and immediately fell foul of some old bat who took exception to our parking on the public highway. But we treated her grumbling with the contempt it deserved and set off. We wandered down the main road a bit then turned into a footpath and....
I'd never seen stinging nettles quite like it before. It took an age to be able to move just a few hundred yards. Eventually the only realistic option was to hop over an electric fence and walk down a field. But once we were over the fence we were able to press on.
It was a lovely day for a walk. We saw all sorts of wildlife; hawks, lizards, viking horses(!) The scenery was beautiful. But we seemed to be taking our time. In theory we should really have been onto the second loop of caches by 1pm; not only be half way round the first one. So finding ourselves near a pub and bearing in mind it was gone 1pm we changed lunch plans and stopped at The Ship in Conyer for a pint and a cheese ploughmans. Very nice.

Eventually we moved on. We found some more caches; we plated flowers into our hair. The plan was to have finished the first loop of caches by about mid day. We actually finished at 3.30pm. Mark joined us and we adjourned to the pub where a pint of East Coast IPA went down very nicely.
Bearing in mind we'd over-run by a couple of hours we considered whether we should continue, but (as it so often does) idiot enthusiasm overpowered common sense and we set off up the road in search of more tupperware. This second loop of geocaches also took us to some rather pretty places. And to quite a few stinging nettles as well. There was a dodgy five minutes when (in a little aside to the geo-loop) we went in search of a geocache hidden by someone else. Eventually we (I) found it; it was in a little derelict house. But I came within six inches of falling in a pond utterly obscured by six-feet-high nettles.

It was a shame we had to give up on two of the caches on this second loop. Time was pressing and the light was failing. We logged our last find at 9pm; having (according to "Hannah") walked a shade over thirteen miles. We joked about doing the third loop by torchlight but it wasn't going to happen. We made our way back to the cars, said our goodbyes and came home.

A very tired little dog hungrily gobbled his tea and went straight to his bed. I won't be that far behind him...