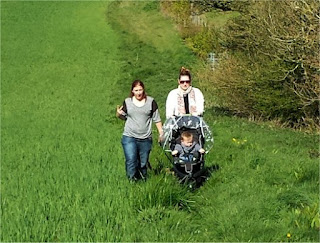 Much as I liked our holiday there is nothing quite like your own bed. I slept very well, even if the house did seem empty without a certain little dog.
Whilst we'd been away "Daddies Little Angel TM" had been round and tidied up. She meant well, and she'd done a good job. It was only a shame she'd thrown away the stand for my razor and the washer which connects the hose pipe to the tap. Bearing in mind the hose pipe attachment is rather old they don't make those any more. I shall have to buy a new one. And an entire new razor as you can't get the stands on their own.

I'd taken one or two photos of our holiday. Over brekkie I put them where everyone can see them. I then put the wet event shelter onto the washing line and went and collected "Furry Face TM". Cheryl suggested we might go for a walk up to Wye Downs. So we collected "Daddies Little Angel TM" and "Stormageddon - Bringer of Destruction TM" and all drove up to Wye Downs.
We didn't stay long. Let's just say that some of us are more "go outdoors" than others. Instead we relocated to Viccie Park where they have "proper footpaths made out of tarmac"

Home; and I then started on the washing. For all that the weekend away had been fun, it had been wet. I had quite a bit of laundry to sort. So I set the washing machine to scrub the first batch of stuff whilst I got in the (now dry) event shelter.
I popped the first load of washing on the line and had a bite of lunch. Over lunch I watched last night's episode of "Gotham", then put out the next load of washing. I then carried on preparing for next week's interview as the third lot chugged through the washing machine.

By the time "er indoors TM" came home I'd got three loads washed and dried and the washing machine was doing its thing with my smalls. "er indoors TM" boiled up a rather good bit of scoff and we set off to Willesborough via Kwik-Fit where Matt was waiting for us.
We had a rather good evening putting the world to rights before watching an episode of "The Flash" through which I didn't sleep for once...