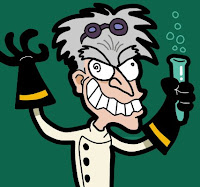 My bruised stomach was still rather painful when I woke this morning. I got up; my dog didn't. I had a rather lonely brekkie watching "Dad's Army". In today's episode out heroes had a fight with the Americans.

As I drove to work the pundits on the radio were talking about genetically modified foods. Two points of view were offered. On the one hand it makes sense to make use of crops which have been modified so that that now yield far more food than their naturally occurring predecessors. On the other hand those who would burn witches at the stake were screaming about the dangers of genetic modification and were shouting that scientists shouldn't meddle with nature.
It rather annoyed me that these people are allowed to vote. Are they really that stupid? Do they not know the first thing about genetic modifications. We've been doing it for thousands of years. One obvious example of this is the rather small genetically modified wolf that sleeps on my bed most nights and goes pretty much everywhere (except to work) with me.
The process by which his genes have been modified was much slower than that employed in the laboratories; it took many generations to get there but the principle is exactly the same as making GM foods..

Talking of "Furry Face TM" I was rather worried about the next news item. Dog fights are on the increase in the UK. Those evil bastards who fight dogs against each other are coming from all over the world to stage their fights in the UK because the legal penalties are far less (should they be caught). Dog fighting only carries a six-months sentence in the UK but the same crime warrants a five year prison sentence in France

I stopped off at Morrisons to buy apples and bananas (which bore no relation to the original fruits of those names) and then went into work for the early shift. I did what I had to until I could go home. But an early start made for an early finish, and I was soon walking my little dog round the park. We met several puppies who wanted to play. "Furry Face TM" ignored them. Rather rudely I thought. He then got into a race that he couldn't win (with a greyhound).

We came home where "er indoors TM" was cooking up liver for my dog's tea. Not that he is spoiled at all. I then spent a little while going over my social calendar for the next few months. Some of the events I had pencilled in have since been cancelled, others have been re-scheduled. I've now only got three weekends with nothing planned in the next three months.
I got some of the dog's liver for my tea, then we went down to Folkestone for the evening. Not a bad way to spend the evening even if I did sleep through Star Trek...