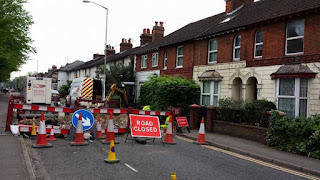 Last night's episode of Gotham was rather good, but there's no denying that Game of Thrones failed to grip me. I slept throough much of the show. In many ways it has become a victim of its own success. Like Heroes and Lost it started very well but it has now run out of story and the writers are obviously now making it up as they go along. We are now at episode three of the new series and nothing of note's really happened. (or if it has, I've slept through it)
I then had another terrible night's sleep, mostly spent listening to the sound of the rain. And I was again up at 5.30am watching drivel on the telly. After an hour or so "Furry Face TM" got up and spent a few minutes uncontrollably barking at absolutely nothing at all. I wish he wouldn't do that. Having barked himself silly he then went back to sleep. Funnily enough I felt like doing the same.

And so to work. It was a rather rainy drive; if nothing else the rain washed some of the dirt off of my car.
Those who would have us leave the European Union were on the radio making great show of how the Prime Minister has recently had to make concessions to the German Chancellor. This is apparently terrible....
I can't see it myself. The Prime Minister's job is effectively performing a juggling act trying to keep everyone happy. He has to keep all sorts of people sweet; for myself I have as much in common with the German Chancellor as I do an MP from Hull or Whitby so I don't really see any problem here.

And talking of Whitby the pundits on the radio have been touring the country getting the opinions of the Great Unwashed about the European Union. This morning they interviewed some fishermen from Whitby who claimed the European Union's rules on fish quotas are killing their livelihood.
They accepted there had to be a limit on how much cod they can pull out of the North Sea, but they didn't like the fact that the limit in question had been set by bureaucrats in Brussels.
However they made no secret that it would be perfectly acceptable to have to work to exactly the same limit had it been set by a bureaucrat in London.

I got to work little earlier than I needed to, so I spent a few minutes checking out the world via my phone's Internet connection. Several people were grumbling about the rain and calling it "a return to typical British weather". I was very tempted to ask when we last had heavy rain but resisted the temptation. After all having heavy rain is nowhere near as British as grumbling about heavy rain.
And I had a message that a possible family trip to Legoland had gone west.
I was rather disappointed about that; I've never been to Legoland.

Once at work I did that which I couldn't avoid and then came home again. The weather had chirped up a bit during the day. As I walked out to my car my phone rang. It was the BBC asking how Ashford's application for dark sky status was progressing. I wish I could have been more helpful but not actually knowing anything myself I couldn't actually say anything. I wonder if they will quote me...

I got home to find my road's been dug up. I wonder what's going on...