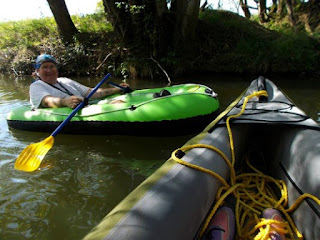 Some time ago I downloaded a little Star-Trek based game which is played on my phone. I lost interest after about two minutes. Periodically it sets off alarms to remind me to play it. It did one such alarm at 5am this morning.
I tried to get back to sleep, but it wasn't happening. I got up shortly after 6am and over a spot of brekkie I watched an old episode of Fort Boyard. Always an entertaining show even if Melinda's chest is a little distracting.
And then I had a look on-line. It seems that I wasn't the only one who'd had an eventful day yesterday. I quite like Facebook if only for the opportunities it offeres for me to be nosey. However my piss boiled a little as I read the blatently racist stuff my ex-brother in law (amongst others) was posting. Sadiq Khan has been elected Mayor of London. The chap was born in the UK... when the right wing racists finally start deporting everyone who doesn't fit their model of who should be allowed to remain in the UK just where will they stop?

I woke "er indoors TM", loaded HMS Badger (and pump) into her car, and (having settled "Furry Face TM") we were off. This morning's geo-mission was (again) gonig for combinations for terrain and difficulty that have so far eluded us. "High Terrain" caches are ones which are difficult to get to. Today's were in the river Teise.
Pausing only briefly to collect a puzzle cache five of us were soon inflating our flotilla; ably supervised by Jo and Ben who had come along to offer moral support (and to laugh). "HMS Badger" was the only rubber dingy; Gordon and Matt (and their crews) were in inflatable canoes. In retrospect HMS Badger turned out to be a disappointment. Its top speed was about one tenth of that of a canoe, and I seemed to spend an inordinate abount of time trying to extricate my vessel from various aquatic undergrowths. I shall replace it with a canoe at the earliest opportunity.
There was an embarrassing five minutes when the river was completely blocked by a collapsed tree. There was another embarrassing five minutes when I actually fell in the river. Mind you I'm not complaining. If the high terrain caches had been in trees then a fall would have hurt. Falling in the river was utterly painless, even if it does teach you the value of dry pants.
We went out with several riparian targets; we found three. I was impressed.

We only intended to sail for a couple of hours; once dried off we picked up another cache just up the road (as we were driving by) and made our way to Rochester where a geo-birthday event was taking place. A rather good bit of dinner, several pints, and the company of good friends. I can think of worse ways to spend an afternoon.

For some odd reason I slept much of the way home; once home we took "Furry Face TM" for a walk round the park. He spent far too long playing silly beggars in the river. We have a new game for the river; he stands in the middle and I throw a stone in. He swims-jumps-runs in the general direction of where the stone splashed. And then he woofs until another stone is thrown in. And so it goes on.
I find it a tad dull, but he seems to love it.

We came home, put wet clothes on to wash and then had something of a lazy evening... I ache somewhat.
Do any of my loyal readers want to make me an offer on a rubber dingy?