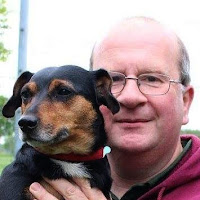 I woke probably an hour earlier than I needed to. Mind you my dog got up with me this morning and sat with me as I scoffed my brekkie. He didn't scrounge; he just put his chin on my lap and went to sleep. I sat quietly stroking his back reminding myself that I never wanted a dog.

It was as well that I was up early. Today was a geo-calendar day and bearing in mind how badly the last one went I thought I'd make an early start. After all I wasted over four hours on my last geo-calendar debacle
I set off to Junction 11 of the M20 and from there took the A-road. There were supposedly several easy-to-find caches along it.
My first target eluded me, as did the second. I was beginning to suspect the worst, but the third time was the lucky one.

I then set off toward Canterbury and work. Up till this point I'd had the radio off so I could hear the sat-nav's instructions. I turned the radio on to hear what I can only describe as stark staring nonsense. Sheikh Saleh Bin Fawzan Al-Fazwan, an influential Saudi cleric and a member of the Saudi Council of Senior Scholars has proclaimed that taking selfies with cats or other animals is “prohibited" unless completely necessary.
In the first instance why on Earth would anyone ban selfie taken with an animal of any shape or form except for cases of extreme necessity. And secondly what constitutes extreme necessity when having a selfie taken with your pet?
Is God *really* going to smite me with a thunderbolt for having a photo taken with my dog? If so I have to question if I want anything to do with Him.

I stopped off at Morrisons on the way to work. Having run out of peanut butter at home I needed to get a sandwich. Morrisons was dull this morning. Probably not a bad thing.
I arrived at work a little early. Having time on my hands I wandered down to the minor injuries unit. It wouldn't cost anything to have my bruised tum checked out by a medic. You never know - I might have had a mesenteric thrombosis (look it up!)
I booked in and the receptionist took down my particulars (Oo-er!). I was rather vague about the exact circumstances by which I'd got the bruise; normal people don't understand the need to climb through a bridge into a river.
It wasn't long before a nurse was asking me to take my trousers off. Result!!
I had my stomach mauled about and after five minutes I was sent on my way with a warning to act my age and not be so daft in future. There's nothing wrong that time won't put right.

Just as I was about to go and do some work my phone beeped - an email. Yesterday I mentioned I was struggling to get in touch with the chap I thought had been booked to give the astro club's talk in July. I've now got hold of him. He had no idea we were expecting him, but all is now sorted (on the speakers front) at the club... at least until next March.
And whilst on the astro club, over lunchtime I got a mention for the club on the council's tourism website. I would have thought that with all the work the club has done for the local council over the last year or so they would already have made mention of us.
I wonder where else we might get a free plug.

I did my bit at work, and came home. I had several offers for the evening. "Access All Areas" was playing at the Farriers Arms. Had they been playing absolutely anywhere else I may well have gone along but I resented paying seven quid to walk through the door of somewhere that messed me about so much last year. There was a geo-meet in Bredgar supposedly organised for a geo-band. But if I was going to listen to live music it would be that of mates.
Instead "er indoors TM" came home with fish and chips...